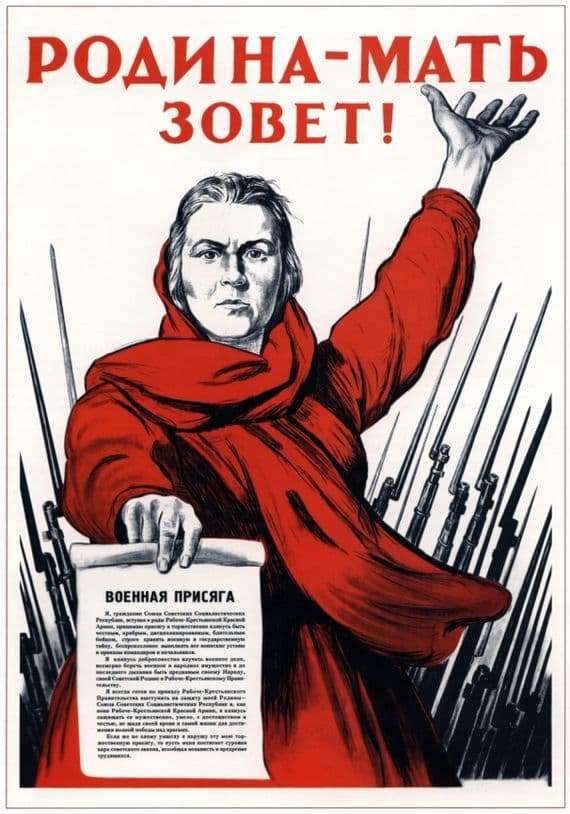 Motherland is one of the most famous propaganda posters in the history of the Soviet Union. The history of its creation is very simple, but it is no less entertaining. The poster was born in the first days that have passed since the Nazi troops attacked the Hitler Third Reich against the Soviet Union.

The declaration of war was broadcast on all radio channels of the state, so that every resident of the country heard about this terrible news. The artist Irakli Toidze, the future creator of this masterpiece, was no exception. As he confessed over time, the idea of ​​how the poster would look, visited the author quite by accident. Toidze learned about the German attack from the words of his wife.

On the morning of June 22, 1941, after the announcement of the Soviet Information Bureau, the anxious artist’s wife rushed into his studio with only one word: “War!”. Struck by Toidze, seeing all the horror and calm determination on the face of his woman, immediately asked her to stand still. It was his wife who served the artist as inspiration for creating a poster. On it he depicted an ordinary woman in a simple red dress, which should symbolize the image of Russia-Mother.

There is a certain continuity in the heroine of the poster, similar to which was already used during the first war, as well as during the Civil War between the Red Army and the remnants of the White Guard troops. In the hands of the Motherland takes the oath, the adoption of which was mandatory before being sent to the front to fight the troops of the German invaders.

Behind the woman, many bayonets are visible, which symbolizes a powerful force behind the back of the whole country. The poster had its strength: many conscripts, impressed by this propaganda method, tried to enroll as volunteers as soon as possible to be sent to the front.