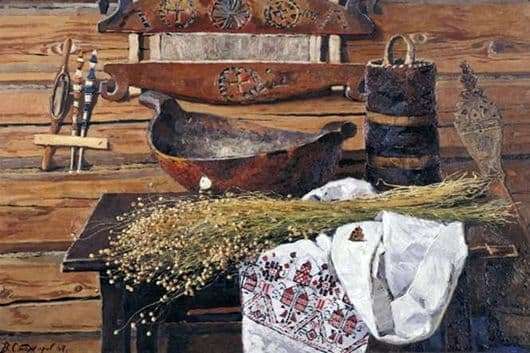 The artist like no one else was in love with the old days. From an early age he traveled through the Russian northern cities. In general, the North of Russia, especially the Siberian expanses, were the most favorite places of Stozharov. He learned a lot from the Russian common people and, as a gratitude, he mostly painted pictures about rural life, about provincial life. Most often these were genre landscapes, but sometimes the artist indulged himself with still lifes. And before us is one of his works – the still life “Lyon”.

Moreover, this work was perhaps the first, which went somewhat at odds with the policies of some artists of pseudo rural life, who showed the village pompously with broad patriotism. Stozharov did and continued to do it all at times more modest and much warmer, much closer… How simple is this canvas: a rough wooden table with an embroidered towel on it, and linen on it.

A spindle hangs on a wooden wall with large ancient cracks, an old brother’s statue stands on the table, tuesok, spinning wheel. All this is Russian, all this is folk, native. But there is an amazing detail in this canvas – butterflies, without them it would be lifeless. And not just a decoration, but life, which is next to the objects of everyday life. And it turned out not dead still life, but some kind of living and warm, who want to admire.

Stozharov always managed to convey life, the current life of the Russian hinterland. And he did it without any pathetic rise, this is not his style. That is why they were amazed at his exhibitions of naturalness, just for a long time people on the canvases have not seen the real village.

Of course, not everyone liked it, but they understood that you could not fight with true art.

The artist, alas, lived a little, only some forty-seven years, but left a good good memory of himself, like a true Russian painter of modern Russia.