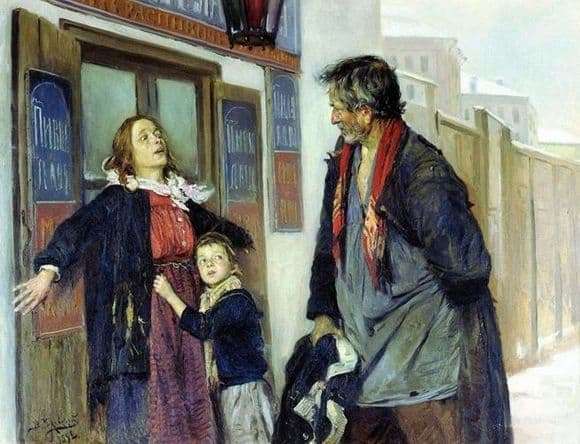 V. Ye. Makovsky wrote wonderful genre scenes, which at times were incriminating in relation to the evils of society. Russian artist imbued with sympathy for these ulcers of public life, brought into the world a lot of tears, pain and death.

The picture “I will not let you go” tells us about the harmful burden to alcohol. The work was done in 1892, when many villages turned into cities. Viewers see the urban area limited to the picture frame.

The fence is built by leaving blocks – with a realistic perspective; standing above him are high-rise buildings. In the near view there is a street lamp and open doors of a tavern with bright signs: “Beer”.

Three human figures are depicted in the foreground. Female figure blocks the entrance to the pub. A boy grabbed the skirt of the woman. Together they turned their eyes on the man standing opposite. This is a husband and father, a tall middle-aged

Zabuldyga set a goal to get to the tavern and, it seems, with hatred looks at stopping his wife. A woman with despair and horror in her eyes does not want to let a man. The little son with pity hugs his mother, his sad eyes do not touch a bit addicted to his father’s drink.

Makovsky refuses to depict the pernicious habit in the aura of aesthetization and romanticization. Only the truth, albeit a very bitter one, is seen by the spectators in the film “I will not let out”: the tragedy of forgotten love, the drama of children’s solitude and the horror of the moral and physical appearance of a person caught up in alcohol.

The picture is written in the style of realism, genre – genre painting. The artist conveyed a sad mood with the help of greyish, dull colors. Earthy and dirty greenish shades give the canvas an atmosphere of pain and doom.

The drama is enhanced by the ostentatious loneliness of a couple: there is not a single living soul, not a single hint of salvation in sight.