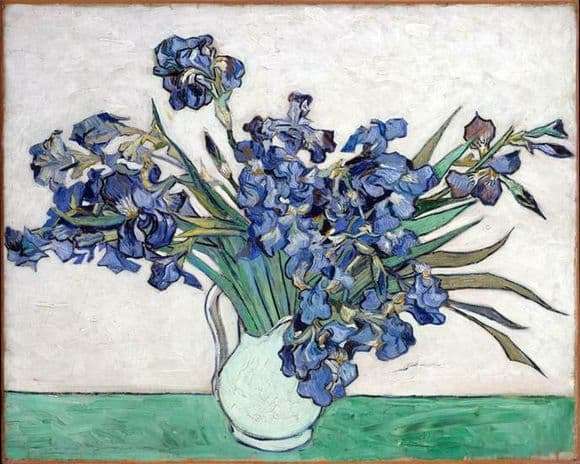 “Vase with irises” is one of the few still lifes created by Van Gogh during his stay in the clinic after cutting off his ear. The artist did not have the opportunity to go for walks, and he was quickly bored with writing copies of paintings by other artists. Then Van Gogh and began to paint still lifes with flowers. Most often it was roses or irises.

This picture is very different from other works of the artist. Obvious clear outlines of objects, leaves, each petal. Harmoniously sustained coloring work. The author’s desire to look around, gather thoughts, organize at least some self-control.

The surface of the tabletop is only a green stripe, and a vase with a lush bouquet is located exactly in the center of the canvas. Flowers in the bouquet are distributed fairly organically, there are no voids, the composition is well thought out.

The color scheme of the work is presented in a combination of cold pastel tones. A blue and white vase is clearly drawn and highlighted on a pale purple background. The flowers look a little fading, this is done by a unique combination of ultramarine shades, pink interspersed with white smears. The leaves of irises are originally echoed in color with the surface of the table. A distinctive feature of the writing of still lifes by Van Gogh is that he does not paint large planes, but tritely fills it with one color. But objects and forms neatly models, using chiaroscuro. By the similar principle masters of an engraving worked in Japan which creativity always differed in accuracy, speed and clearness.