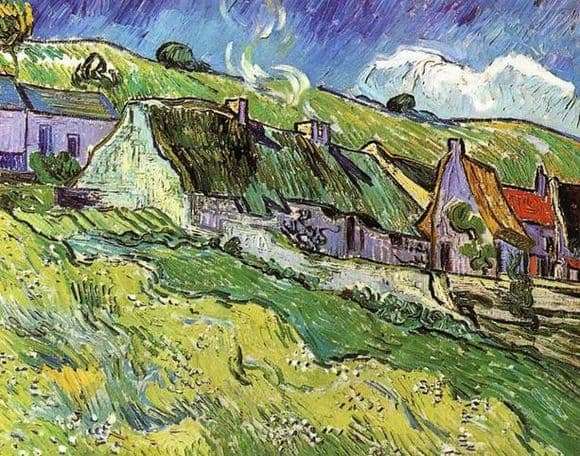 In the heyday of artistic talent, Van Gogh paints the landscape of “Hut”. This happened a few months before the death of the brilliant painter. In May 1890, the Netherlands artist lived in the town of Auvers in northern France. The mild climate in this small French colony should have a positive impact on the health of Van Gogh. What can be ascertained with precision is the goodness of this area for the creative inspiration of the painter. He creates more than 30 new creations.

The Huts are not just written as Auver’s cityscape. These modest buildings surrounded by nature reminded the artist of his homeland in Holland. Affection and nostalgia embodied Van Gogh on the canvas.

In letters to his brother Theo, the painter explained what was depicted in the painting “Huts”. He wrote that he chose old houses that were covered with straw to be embodied on the canvas. For the foreground of the picture I chose bread and flowering peas, and for the background – hills and sky.

We see on the canvas of 1890 the realization of the idea of Van Gogh. Depicted a dynamic picture of nature. Several single-storey huts are located in different angles. Small houses look cozy and habitable. Smoke clouds swirl from the chimneys on thatched roofs.

The nearest plan of the canvas is covered with a grass carpet: here pea flowers bloom with white flowers and wheat spikes. In the distance, steep hills overgrown with grass and single trees. The blue sky here and there is covered by the oncoming thick clouds, and somewhere it turns into bright ultramarine.

The painting “Huts” is distinguished by the tranquility of its color range. Van Gogh preferred faded natural colors: light green, olive, blue, pale yellow. It stands out on such a background the red roof of one hut.

The landscape is written in dynamic strokes, with some anxiety and tension. The content of the picture swirls and shimmers, making the landscape truly natural and alive.