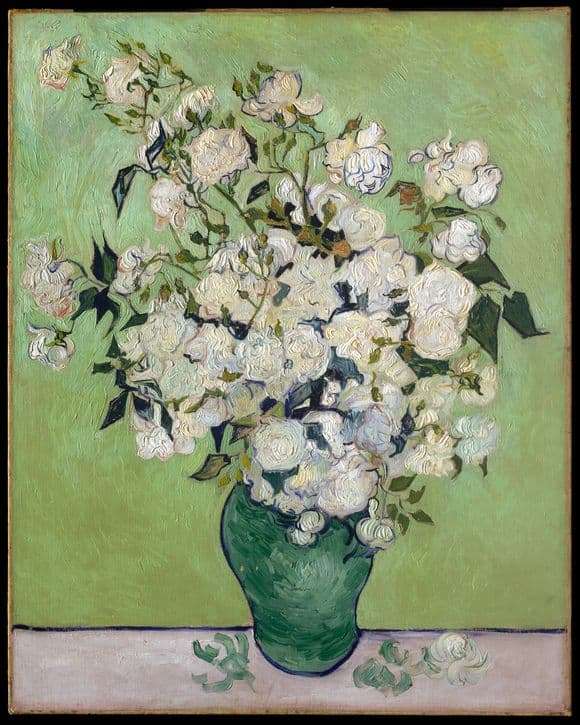 “White Roses” represent the later works of Van Gogh, when he was already close to madness and his tragic death. Wanting to relax, he left Paris on the outskirts, where he wrote a lot of flowers – on bushes, in vases, without a clear background – and the roses must have caught his eye by chance.

In the picture there are very few flowers, this rhinestone is striking. A table of indefinite color, the tone of which is changed by the shadows falling on it. Vase green, dark, saturated color. The wall is light green, with a vase not so much contrasting as the continuation of its overflow of color. The roses themselves are heterogeneous, look as if they were collected on different days.

Some are lush white, just ripped off, bright. Other withered, yellowish, one such bud is on the table. This contrast, together with the petals falling on the table, the contrast between life and death, or rather, death and death, is perceived a little even creepy.

It was as if Van Gogh found some pleasure in putting together dead flowers, and as if to compare them in writing, withering and full of ghostly life, yellow and white, those that will soon go to the compost heap and those that will stop their day by two.

In this opposition of deaths, there is something unnatural, something deeply wrong, and, perhaps, in a harmless still-life, the struggle of the artist’s inner demons is hidden.

However, it is just as possible that Van Gogh simply liked the flowers, the contrast of the wall and the vase, and he wrote them in haste, without thinking that in many years the descendants would look for the highest sense in his actions.

It is unlikely that he even assumed the existence of future descendants, who, after many years, will appreciate his work and will analyze them seriously and thoughtfully.

Perhaps if he were sure of this, his life would have ended differently.