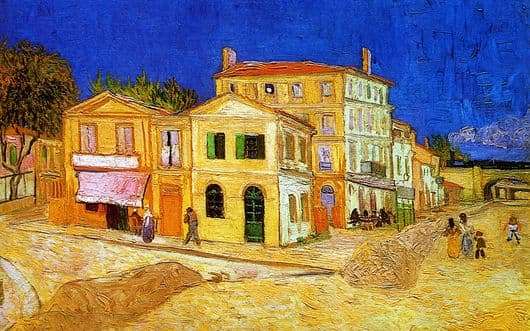 The famous Dutch artist painted this picture in the autumn of 1888, when he lived in the French town of Arles. The plot was based on the real dwelling of the artist and his long-time dream of a special creative workshop. The building itself, located on the central square of the town, was rather dilapidated, however, in spite of everything, it inspired Van Gogh.

Having rented a home, the artist painted his walls, after which he solemnly called the Yellow House. This color had a special symbolic meaning for the artist, and in addition, was associated with sunlight and summer heat, causing a desire to live and create. For a long time, Van Gogh did not have enough money to buy furniture for a new home, but this fact did not diminish his enthusiasm and hope. In all the paintings of that period, every house was depicted in yellow.

From November to December 1888, his friend, the French artist Paul Gauguin, lived on a visit to Van Gogh. The paintings created in this house by two poor creators, after their death, were recognized as world masterpieces.

The picture depicting the Yellow House in Arles, painted in oil on canvas in the spirit of the post-impressionism style familiar to Van Goa. The work combines a realistic image with a deep subtext, expressing a constant, essential state of life. The yellow house has become for the artist a source of inspiration and a special sign. The picture is filled with bright hopes and enthusiasm, symbolizing the most important dreams of its creator.