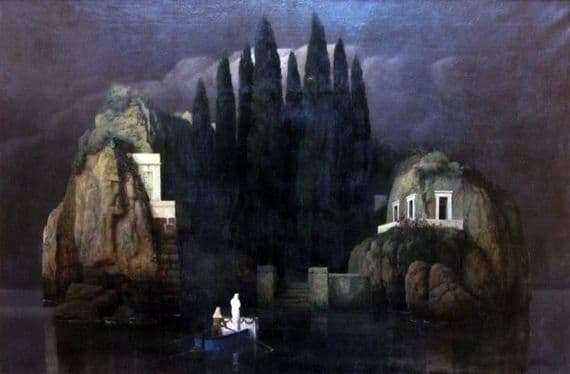 The basis of this picture is the ancient myths that tell about the last refuge of dead heroes and those whom the gods loved. They rest on a lonely island, lost from human eyes. The shores of the island are washed by the waters of an underground river, which has crystal clear waters with a mirror reflection. The picture shows how the boatman to ferry one of the departed to the place of his eternal life.

In the center of the island rise to the sky cypresses. According to the artist, they should symbolize the grief and mourning that accompany every death. Like them, the soul of the departed rises on the edge of the boat in white robes, so sharply contrasting with the surrounding background. The sky itself is tightly closed with dark, sometimes leaden clouds, which at any moment are ready to bring down many liters of water.

For some reason, neither the boat nor the people sitting in it are displayed in the mirror water. Perhaps the artist thus demonstrates that the departed are completely erased from the world, and therefore even the waters do not show them to mere mortals.

The size of the island for some reason is too small. Perhaps this is because there are not so many heroes and favorites of the gods that there is a need for a large area of their place of residence.

It is worth noting that the reproduction shown in the picture is only the second version of the work. In total, Becklin created five different versions of “Islands of the Dead”, differing from each other in a set of primary colors (there are lighter as well as “warm” versions), but also the entire composition. Most of the island changes shape: on one of the canvases, cypresses “climbed” onto the roof of the building, on the other, the house resembles the Romanesque style of architecture; The same applies to the sky: somewhere it is dark, raging; and on the second canvas it pleases with morning colors. Only the figure of the deceased remains unchanged.