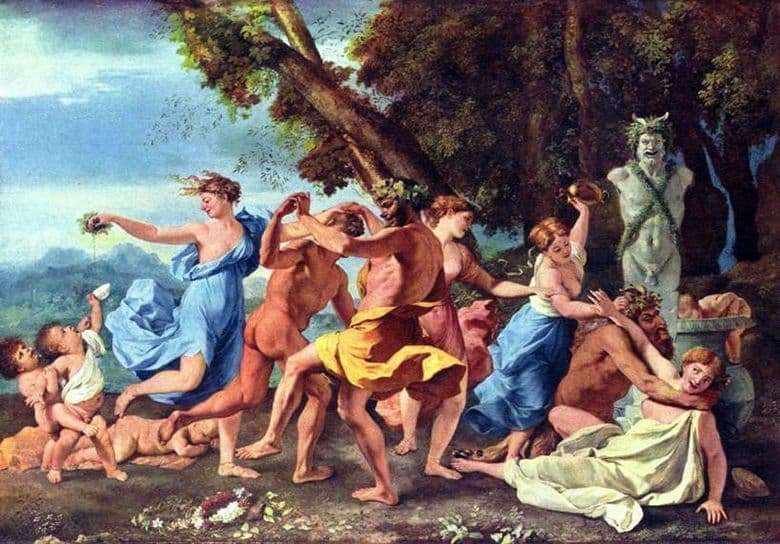 A bright, colorful painting by Nicolas Poussin “Bacchanalia”, remembered by his images, written in the romantic-mythological style, is now in the London Art Gallery.

The main characters of this wonderful painting are young, carefree creatures who are alien to physical labor. These bright gods are having fun, dancing and having fun around their deity named Pan and placating him.

In Greek mythology, it is the patron saint of shepherds, forests and fields. In the Renaissance it is the deity of debauchery. He is often portrayed with a goat snout and a human body.

The picture does not depict people. The author of this pictorial picture depicted gods, sirens, faun, by which everything is permitted. This is the fun that gods used to see every day. This is their usual, everyday business without which they do not live.

These merry gods live in a surreal little world, where there is no sadness and longing, but there is unrestrained merriment and feast. If you look at the picture, then all those who have fun and drink in full does not get drunk. This trait is inherent in humans, but not divine beings.

Bacchanalia Poussin is alien to profligacy, it is just an excerpt from all the permitted life of divine beings. There is nothing vulgar here. This image is not a realistic, but a mythological, joyful life of gods who rule the world and rule people on earth.

The picture is a bit similar to the Titian’s masterpiece of the same name. There is a child here, which is located on the right, next to the nymph and the faun. The nymph sits on a goat. The baby has small legs and most likely he is the son of a goat (Pan) and at the same time some kind of deity.

The picture thanks to the bright, rich colors turned out positive. She creates a good mood. So the Bacchante dance and the Bacchanalia process itself was seen by the French artist Nicolas Poussin. It was his era and his worldview.