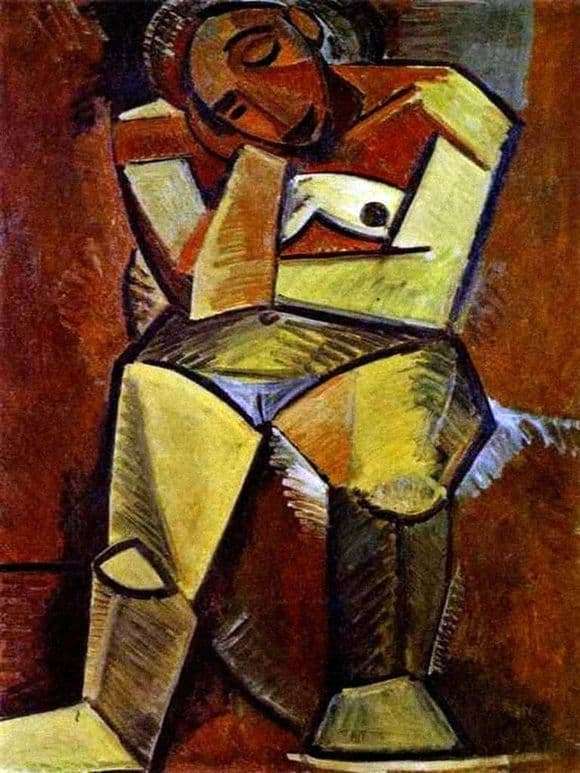 His creation of Pablo Picasso’s “Seated Woman” wrote in 1908. The famous painter is already experiencing the “blue” and “pink” periods of creativity by this time and is entering a new phase of life, moving to a cubic style. In the center of an unusual picture is the image of a woman. It occupies almost all the space of the canvas.

This woman is not thin and fragile as it is usually portrayed artists. Sitting woman Picasso appears rude and stout. She sits, lost in thought, her hands clasped, and, leaning his head on them. Her face expresses the deep work of thought, her eyes are closed. Wanting to show his sitting woman to the viewer as he sees her, Picasso makes her angular, these are the first attempts to show one image from different sides and points of view. Picasso’s cubism using wants to show the diversity of the female image. A woman is depicted not with the help of her inherent smooth and thin lines, but, on the contrary, with the help of coarse, thick, angular lines.

Picasso deliberately violates the laws of anatomy on the canvas, making the woman’s feet different from the feet of a normal lady. Her knees are also depicted unrealistic. In the painting “Seated Woman” there is no perspective. Back background is a simple smooth wall, it is monochromatic. All canvases monochrome palette, as well, and many other masters of creation. In this creation, Picasso uses mainly gamut of brown shades. It darkens the background of the canvas, on which it divides the space of the room into a floor and ceiling with a single, dark, clear line. The upper part of the female body has the same shade as the wall. For the rest of the body, the artist uses a lighter shade, close to the solid, alternating it with a blurred black.