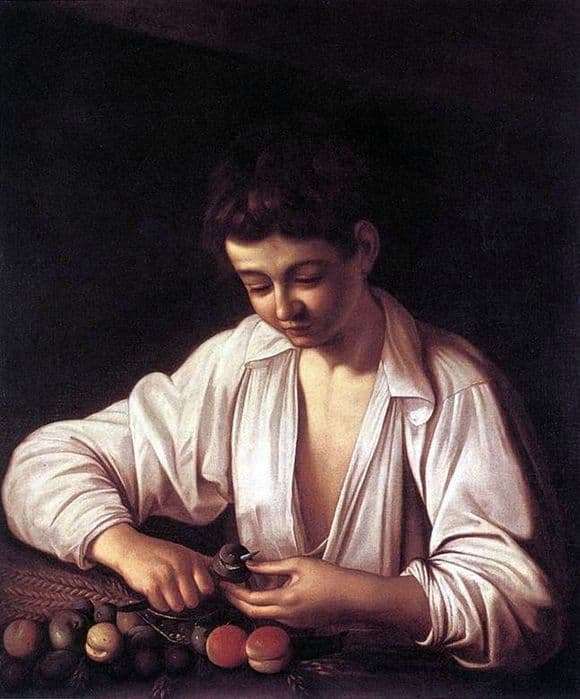 Among those who painted in the technique of realism, who professed the lofty ideals of classicism, it was considered not the best tone to depict the world in all its filth. The fact that there is dirt in it was considered a fact well known and not needing to be sealed. They tried to capture the most sublime and ideal moments that were worth it to bring them to posterity.

All the more surprising is the choice of Caravaggio, who portrayed a servant boy who cleans rotten fruit. The boy has a white shirt; he is depicted in very soft, smooth lines. His chest is hairless, his face is very young – his hands are rough, he could not become a violinist. Hair slightly curled, skin casts honey and bronze. In front of the boy on the table are peaches. Two of them are beautiful, poured, full of sun.

The rest do not look so perfect – they wrinkled and turned black, must have been lying too long or were gathered from under the tree, after the general harvest. Holding a knife in his hand, the boy cleans up the rot from them, and he does it so cleverly that beautiful spiral rings of peeled skin are obtained.

It is evident that he is not accustomed to work, but for now it requires him to fully concentrate. The boy looks at his hands, follows the movement of the knife, and looks completely absorbed in his occupation.

What happens in his head is hard to say.

Maybe he is a beautiful princess, who was hidden in the tower of a terrible dragon, which he, a mighty knight, can plunge. Maybe she thinks that today from these peaches a cake will be made and he can get a slice or jam, and she can try a little before putting it in the banks. Or maybe he doesn’t even think about anything at all, just enjoying a warm day and a habitual quiet occupation.

On a dark background, his skin almost glows.