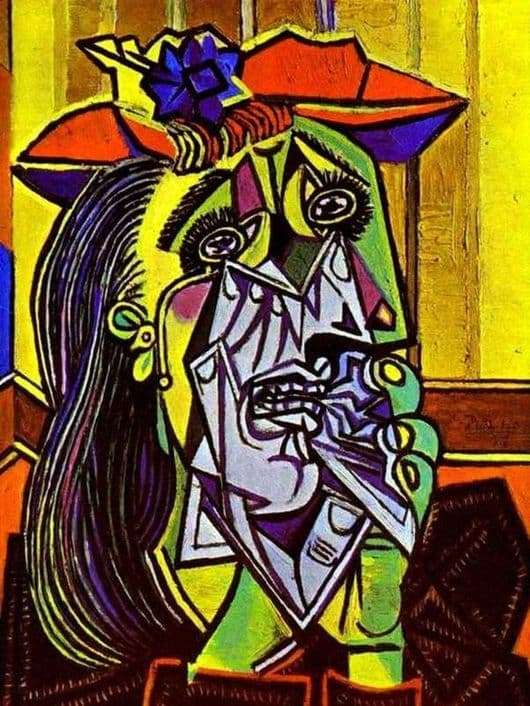 Surprisingly beautiful style of writing canvases always delighted the audience. And Picasso lived a life long enough to surprise and amaze more than one generation of Europeans with his works. Of course, he is not as extravagant as Dali, but he, too, was with his quirks and his portraits really could not be called an exact copy of the woman depicted.

But what is interesting is how he could apply such active colors, so bright and catchy as he could empathize with this woman. Somehow you immediately get into her grief, you begin to think what happened to her, what happened to her that brought her to tears of despair. It is despair, because in that black and gray half of the canvas the handkerchief is compressed with lips and one feels that the tears are bitter. And such tears are only from grief or despair. But what happened? Unhappy love? Loss of a loved one? Losing some stuff? Who knows? Maybe something from this list, and maybe all together at once.

The mysterious world of a woman, and especially her logic, until now no one has been able to decipher. But looking at this canvas, you understand that something terrible and unreasonable happened. And again, it’s all in bloom, it’s all vital. Just maybe we do not always pay attention to how people cry. Picasso turned his attention to this, and as a result, this canvas and another series with the same name. By the way, this canvas is called “Weeping Woman, No. 12”. There is a lot of options and in everyone it seems the same pose. It seems the same, but still there is something of its own in this particular woman in this case. But invariably, just as on this canvas, this black and gray grimace of grief is depicted separately, which greatly distorts the already unassuming face.

In order to at least somehow cling to the glory of Picasso, many women said that it was they who posed for Pablo for these canvases. It is difficult to check, the faces of women on the canvases are highly distorted, but I would not like to believe it, because almost all the women who stated this were of very retirement age.