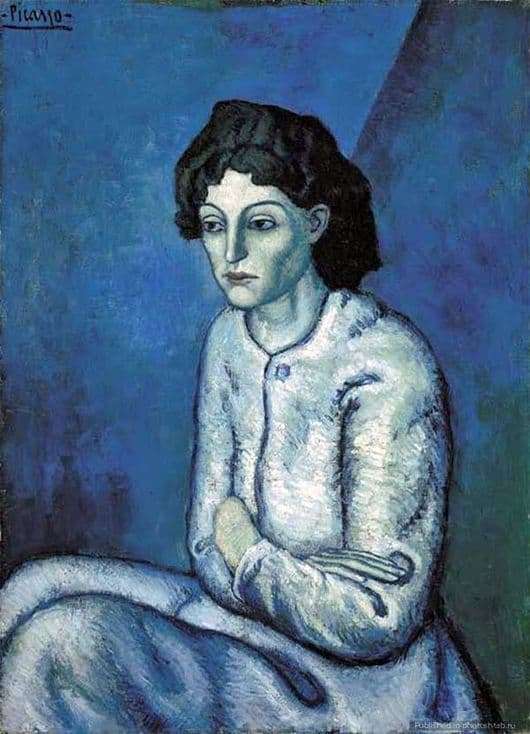 It should immediately say that the painting by Pablo Picasso, – “Woman with arms crossed” is one of the most expensive paintings in the world. Now directly about the canvas, which throughout its appearance can be attributed to the “blue period” of the master, and, naturally, is included in that list of paintings that leave behind a large number of different questions and riddles. The canvas was written in the period of life when Picasso tossed between Spain and France.

If you believe one of the theories, then “Woman with arms crossed” has such a cold name and its embodiment, mainly due to the fact that Picasso did his work mainly at night, namely after sunset and until when it comes up

This shade of the picture is due to the fact that under artificial light, they acquire a bluish tint, while the artist himself further strengthened this effect by adding a more saturated and deep blue tint.

On the canvas in profile is a woman whose face is quite difficult to completely see, but it is clear in her image only that she is overcome by some kind of problem, pain or grief. Due to the great seriousness of what is happening, the impression is quite clear that a woman has a lot of life experience, but her life has been clouded by a deep tragedy.

Particular attention is focused on the position of this lady, who crossed her arms. All this posture suggests that a woman has come to terms with her life, apparently rather sad, and she humbly carries her cross.

When you first view the picture, it may seem that it is quite simple, but it impresses with its deep meaning. The picture is recognized as a true masterpiece of the “blue period” of the artist, she continues to admire all the spectators who were lucky to see it in the original, or at least a reproduction.