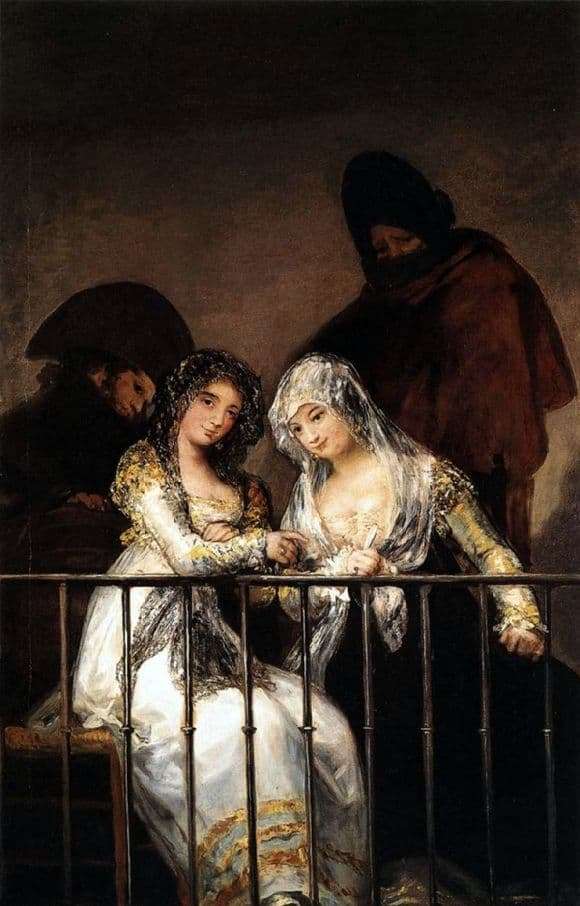 In the best works of Goya, two beginnings are combined – realistic and fantastic. He constantly turned to the bright image of the swing. This is a typical Spanish girl, a simple girl. We see two beauties who are dressed in national costumes of the modern painter of the era. Mahi preferred to wear just such rather simple clothes. In high society was adopted the fashion of France. Right behind the girls you can discern the figures of their gentlemen.

For dresses, the painter uses incredibly vivid colors. Faces are painted with warm colors. Painting Goya is impressive subtle modulations that are enhanced by a dark background.

Two girls settled on the balcony. From here they watch the turbulent street life. They are like two birds caught, which they were placed in a cage against their will. This plot was typical of Goya’s modernity. But he brings some anxiety. In the background you can discern the figures of two men. They wear dark clothes. The hats are pulled almost over their eyes, while they themselves are wrapped in cloaks.

Goya writes their figures only as indistinct silhouettes. They almost merged with the twilight, which are surrounded. One gets the feeling that these are not people, but only shadows that are trying to trap the beauty of youth. But the Mahi themselves are also in agreement with them. Their smiles are really conspiratorial. It seems that they seek to lure those who are attracted by their delicate beauty, in this frightening darkness. This Goya creation is still filled with light. But it already becomes a precursor of tragedy, which is characteristic of the late period.

The artist has always liked genre painting. That is why he chose this story for his canvas.

His picture is expressive. Goya does not just depict a scene from life. He tries to penetrate the very essence of the phenomenon. Color is concentrated to the maximum. The contrast of shades allows to achieve generalization, transmitted in a compressed form.