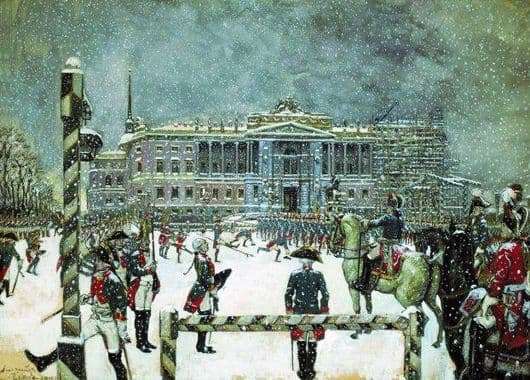 In 1907, Benoit performed a series of works on historical subjects, which included the painting “Parade under Paul I”. This was due to the order of the publisher I. N. Knebel for his “Russian History in Pictures”. In addition to the works of Benoit, the book contained paintings by Dobuzhysky, Serov and other masters of the brush.

Consider the picture “Parade under Paul I”. The canvas carries the viewer to the end of the XVIII century, depicting a march of soldiers dressed in Prussian-style uniforms. In the foreground is captured, the emperor himself, looking somewhat arrogantly at what is happening, in the company of his sons. Their figures undoubtedly resonate with the bronze rider, which is seen in the distance, near the unfinished Mikhailovsky Castle.

The attention of the viewer is also attracted by the figure of the subject, who in reverence and even mute horror took off the headdress before the sovereign.

Everything in this picture is symbolic. Even the image of the barrier, brought to the fore by the artist, is far from accidental. On the one hand, this detail as if separates the viewer from what is happening, creating the effect of a miniature theater. On the other hand, the barrier does not seem to let out the emperor. Thus, the artist shows that the fate of Paul I is solved: he was destined to be killed at the beginning of the nineteenth century in the Mikhailovsky Castle, which looks like a grim omen.

The attitude of the artist to the emperor was ambivalent: for Benoit, the image of Paul I was filled with both knightly nobility and shrill madness. Note that the choice of time – the turn of two centuries – looks very symptomatic for an artist of the Silver Age and cannot be explained only by an order requirement.

In the past times, Benoit seemed to be trying to find the key to understanding which path Russia should take, a topic in general rather widespread and relevant for the twilight era of the nineteenth and twentieth centuries. Perhaps this helped Benoit to display the spirit of those times so well on the canvas.