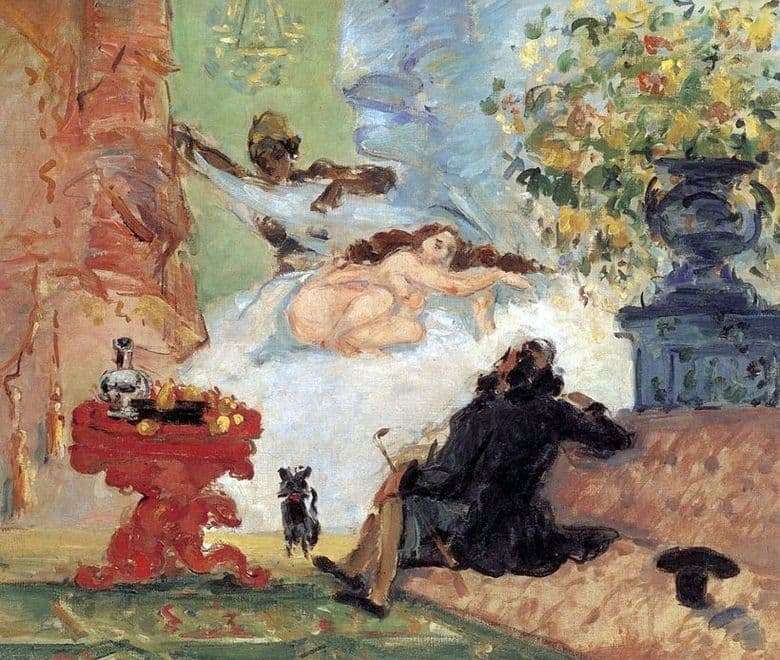 Early Cezanne worked mainly with dark tones. He was inspired by paintings by such painters as Courbet, Delacroix and Daumier. In 1870, the artist creates “Modern Olympia.” Eduard Manet and his scandalous picture “Olympia” had a great influence on the writing of this picture. The second version of the picture was written a few years after the first. She was brighter and brighter than the previous one. At the same time, the style of the artist more inclined to impressionism.

The picture is more like a caricature or draft sketch. There is no structuredness inherent in the late works of Cezanne. By analogy with Manet, “modern Olympia” at Cezanne is depicted nude on a bed. A dark-skinned maid is trying to either cover or uncover a naked woman with a veil. Honors Olympia Cezanne from Olympia Mans – completely mirror. Due to the smaller size of Olympia, Cezanne painted a man who was considering her in the picture. In the figure of a man, many see the author himself.

“Modern Olympia” has become as scandalous as the famous “Olympia” Manet. Many condemned the picture due to the fact that it depicts a woman of an ancient profession. Perspective, in which she is depicted – very frank. We do not know the real motives that the artist pursued, that he wanted to show us when he wrote this picture. Some believe that Cezanne lost his mind when he wrote his Olympia. For the first time the picture for general review was presented in 1874 at the exhibition of the Impressionists.

Anyway, the picture is discussed, loved and enjoyed by it.