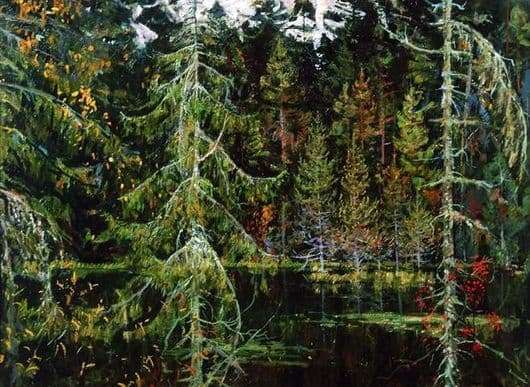 Nikolai Mikhailovich Romadin painted a picture with a clear predominance of exclusively dark tones. The picture depicts a dark lake in the middle of a forest thicket. The visual depth of the lake was achieved by the artist, also thanks to the use of dark tones, which even gives it a certain mystery and virginity of this whole place. The lake is so clean that small spruces are reflected on its surface.

Around the lake is clearly visible vegetable diversity in the form of: coniferous, green fir trees, which are not very fluffy, you can see even a bush of red ash and yellowing birch trees in the background. As for eating, they are here, as stated in the assortment.

You can see the spruce, which have a sufficiently large height and volume, and along with them are thin and low. The darkness in this place also forms an impassable dense forest, which can be observed in the background of the picture. Through this forest, there is no opportunity to break through not a single ray of sunshine.

The picture has many shades, but the most predominant color is green, namely dark green. Nature is captured in the autumn period and this is indicated by red and yellow colors. The whole palette of shades has a deep meaning, thanks to which all the beauty of the lake in the forest is fully revealed, and not so many people have seen it live.

The picture does not fully reveal the whole mystery of the forest lake, since to fully appreciate and solve this mystery, you can only see it with your own eyes and feel the fullness and depth of creativity with which this lake and its entire landscape were described.

The picture seems alive thanks to perfectly matched colors and shades that completely convey the true beauty of nature in its original form, thanks to this the realism of the picture is very high, which is understandable when writing pictures in the landscape genre.