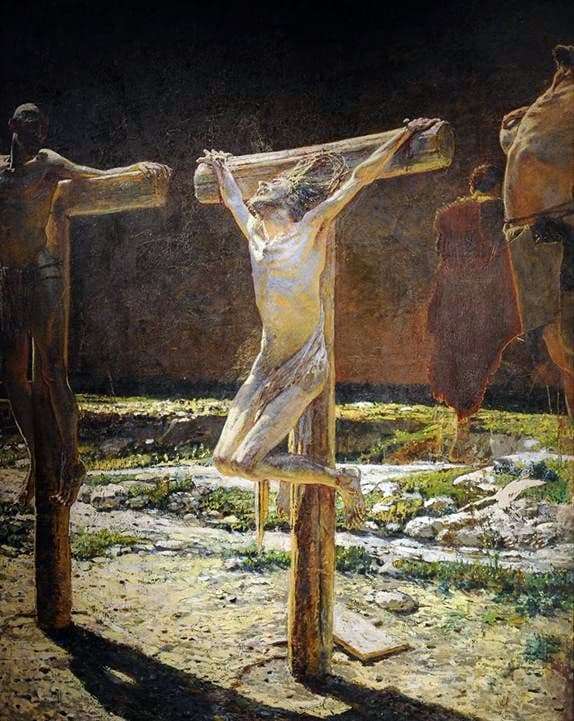 In fact, there are as many as two versions of the Crucifixion. The first version of the canvas was written in 1892, and the second two years later. Anyway, the first and second versions of the picture produced the same impressions on the viewer. Canvases induce oppressive and hopeless emotions. Probably it is difficult to underestimate the hopelessness and complete despair of the last moments of the life of Christ and his death, which, to everything else, is unbearably painful.

Nothing can be done when the body is nailed to the cross and hangs on it. Paying attention to the face, one can see how the death throes distorted the face and a death painful cry came from the mouth. In this work, painting is full of expression and realistic expressiveness. As the main reception, the master uses sharp contrasts and the play of light and shadow. Note, as symbolically and indifferently depicted, apparently one of the “executioners”, that in the background, having done its work, simply indifferently went about his business. Christ on this canvas is not suffering alone; there were a number of other disagreeables who shared his torment with him and his fate.

Very scary sight. In fact, like the fate of Christ, the fate of these two paintings, which passed from hand to hand, was no less dramatic until one canvas settled in d’Orsay (Paris), and the second was auctioned off to an unknown buyer. One day, one private collector suggested that the USSR Ministry of Culture redeem this painting, but as soon as a refusal was received, the canvas disappeared again and so far there is no information about its location. Works as an artist himself were truly outstanding. Ge could in one work show a whole era and make you think about it, penetrating the most secret corners of consciousness. Pictures reveal not only the positive aspects of life, but also its real, sometimes cruel corners, which have been, are and will be in any epoch.