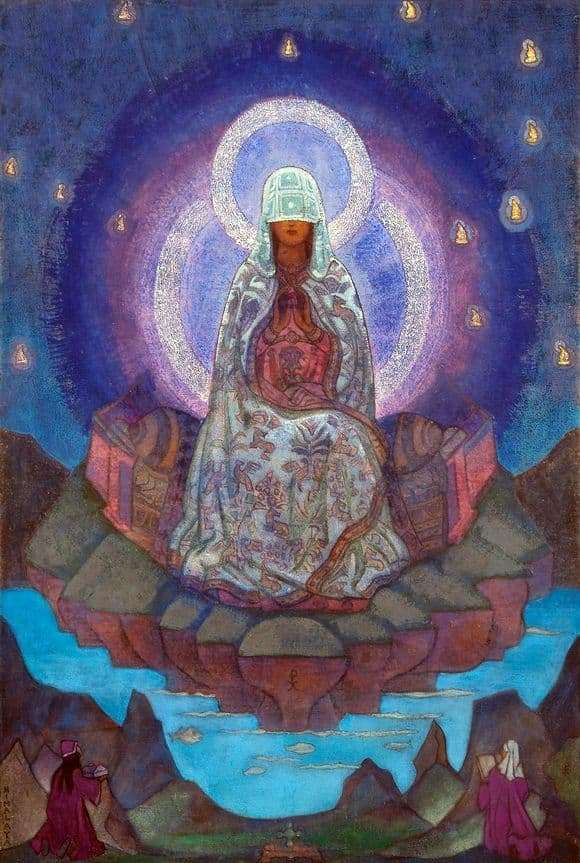 Carried away by Eastern philosophical and religious movements, Roerich considered it his duty to carry them through work to people who were far from them. Expressing himself through what he did best – through painting – he simultaneously popularized what he believed in. Even if people did not understand the meaning of the pictures, they might be interested. Interested in – read. Having read – having believed.

The Mother of the World is one of his most optimistic pictures, because her very meaning implies the end of the Dark Era and the beginning of the Light One. On the throne of the mountains sits the Great Mother, who is the single feminine principle, which in different religions was called differently, never forgetting, however. Empress – the lasso of the Tarot, symbolizing the mother. Virgin Mary – Christian reflection of the mother.

Many pagan, ancient religions revered not a single

creator, but a single goddess, who at the dawn of time gave life to the world. It is this most ancient archetype of the mother who gives, protects and embodies the Great Mother. Her face is hidden under the hood, but the lower part, visible to the viewer, impassive and similar in color to bronze, is illuminated, indicating that the happy, bright century and the imminent discovery of knowledge is coming.

Heaton its free waves falls down, symbolizing order and harmony in everything that surrounds the Mother. Behind her, in the sky, the Seven Starts and Three Maga are constellations, and between them stands in radiance and glory, just above Mother’s head, the morning star, also foreshadowing joy for all.

Around the mountains that serve Mother the throne, a river flows, symbolizing the endless river of life that feeds itself. The fish swimming in it are people, their fates, looking for themselves in an infinite current. A woman and a man look out from behind the rocks, their poses express admiration and awe.

And this is right – let Mother and bears only one good, not to revere before her – blasphemous.