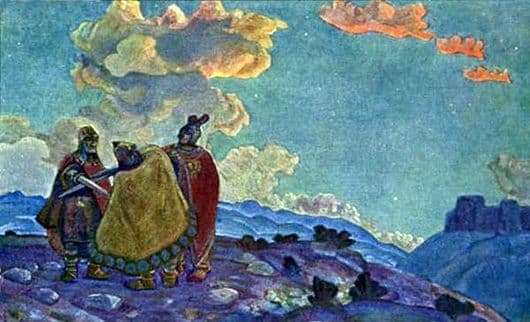 Roerich and here is true to himself. Again soft paints, like on other canvases and again a little historical plot, as well as on some of his canvases. But here is another story entirely different. There is a place for both mythology and history and a natural phenomenon, and of course more attention is paid to nature. Look carefully and you will not immediately understand where the crowns are. And the crowns are clouds, the crowns are the protrusions on the ground and, in the end, three fight for the crowns. Yes, it is fighting.

The artist rather ineptly portrayed the battle here, but from the characteristic movements it is clear that a melee is really being fought for the possession of the territory. Such a conclusion can be made when it is detected in the distance of the city walls. But look how the artist depicted the blue distances of the mountains, he kind of merged these distances with the sky, but at the same time awarded these two elements with different colors – the sky is dirty blue, but the mountains are blue, with bright blue. By the way, there are also three crowns in the sky. Somehow all three each… Considering that Roerich lived in Tibet for a long time, one can understand his passion for numbers.

For Buddhists, numbers are important. On the canvas all three – three warriors, three protrusions on the ground, and three clouds that are removed through the sky away. The result is the figure nine. In Buddhism, this figure determines the power of the earth and nature. And Roerich is precisely the force of nature and the power of the human that shows on his canvas. Moreover, there is a certain sense of foreboding misfortune. It hovers around, it is almost tangible. It was possible to transfer to the author. Moreover, there is a premonition in the shades of the canvas. For example, the image of the city. It is distant and gloomy. It exacerbates the unpleasant feeling.

Roerich rarely depicted death or misfortune on canvas. More often on his canvases only joyful sensations. But here everything had to move slightly away from the idyll. True, the master did it reluctantly, as if unwilling.