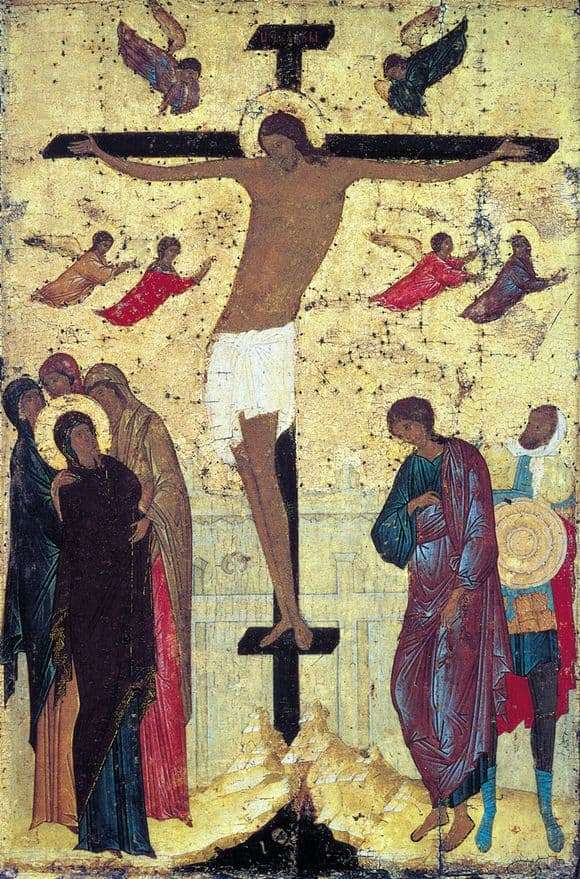 “Crucifixion” is a classic icon written according to all canons. It does not have the liveliness inherent in the images of saints from the Renaissance masters, there is no grotesque image of hellish creatures inherent in Borges. It is simple and beautiful in this simplicity. The cross depicts the body of Jesus. It is curved in misery, arms open, nailed to the cross-bars, but it looks like a hug, forgiveness, the desire to embrace the whole world.

On the plate, on the top of the cross, the canonical inscription – “Jesus Christ, King of the Jews”, made in mockery. Before the coming of the Messiah, the Jews believed that he would free them from earthly slavery and himself would sit on the throne. The inscription is a mockery of their faith, becoming a reminder that Christ should never have become an earthly king, but always was the king of heaven.

On the right side of the cross, women support Mary.

She covers her face with her hands, turning back in misery and grief and seems ready to faint. The rest keep her from falling. She is old, she should not have seen the execution of her son, but what kind of mother could have stood aside at such a moment.

On the other hand, a Roman legionary who stabbed Christ with a spear when he died. it was done so that none of the condemned was suddenly miraculously survived. Next to him is John the Theologian.

The angels, depicted under the crossbar, accompany the two women. One of them leaves – this is the Old Testament church, synagogue, the second one comes, this is a new Christian church.

Under the foot of the cross is a skull. This is the head of Adam, who, according to legend, was buried many centuries ago at the place of execution. It symbolizes the entire human race, the sins of which Christ redeems through his torment.

The important thing is that even on the cross, Christ did not succumb either to malice or hatred. Turning to heaven, he begged the Lord to forgive the people who were crucifying him.

“Forgive them, for they know not what they do.”