Home ⇒ 📌Caravaggio ⇒ Description of the painting by Caravaggio “The Crucifixion of St. Peter” 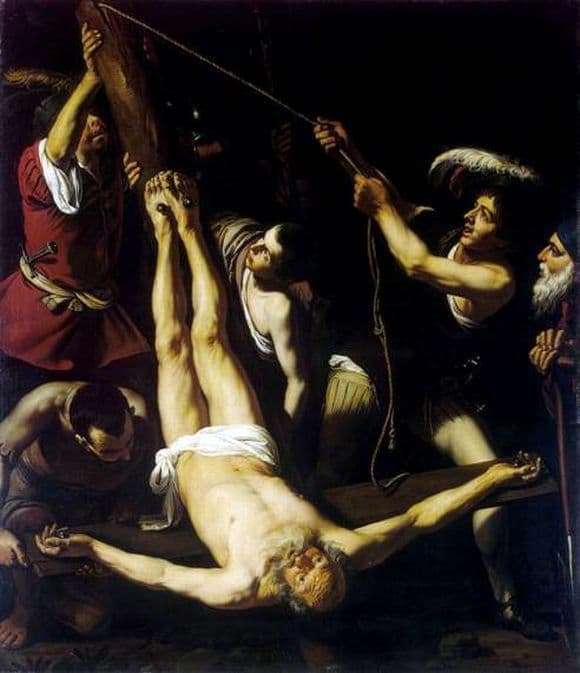 Caravaggio is considered to be not only the best master in the entire history of the development of artistic art, but also one of the brightest and most talented representatives of such a style of drawing and displaying paintings as baroque. A little later, it was this style, with the help of Caravaggio, that supplanted other, no less popular and well-known styles even today.

These styles, which could suppress the Baroque, include, for example, Mannerism. Thanks to his peculiarities and manner of display, he was able to accomplish the most genuine revolution, first in Rome, and then, after this, on the territory of Naples.

What is remarkable is that the artist as a person was very disgusting, so almost everyone who in one way or another treated his surroundings tried to avoid him. And, despite its disgusting nature, it is on a par with the most influential and respected Baroque artists in Italy of the 17th century.

painted his picture, which depicts the crucifixion of St. Peter, specially commissioned by the church in 1601. Along with this, he painted Damascus two other paintings. Only through these four of his works, he became a popular, influential and authoritative artist of Rome.

It should be noted that not every authority of the churches considered the works created by him as unholy and vulgar. But there were those who did not accept some of his work due to the ugly appearance of the characters.

In the picture, the artist most vividly and colorfully displayed the torments through which Peter I had to go. Peter, according to history, himself insisted on being crucified from bottom to top, so that the process of crucifixion did not look like the crucifixion of Christ.

Here, as in almost all works, the artist deprives the viewer of all the details, if he believes that they are not needed. That is, it is a dark background, so attention is riveted on the figure of Peter.