Home ⇒ 🎨Ge Nikolay ⇒ Description of the painting by Nicholas Ge “What is truth?” 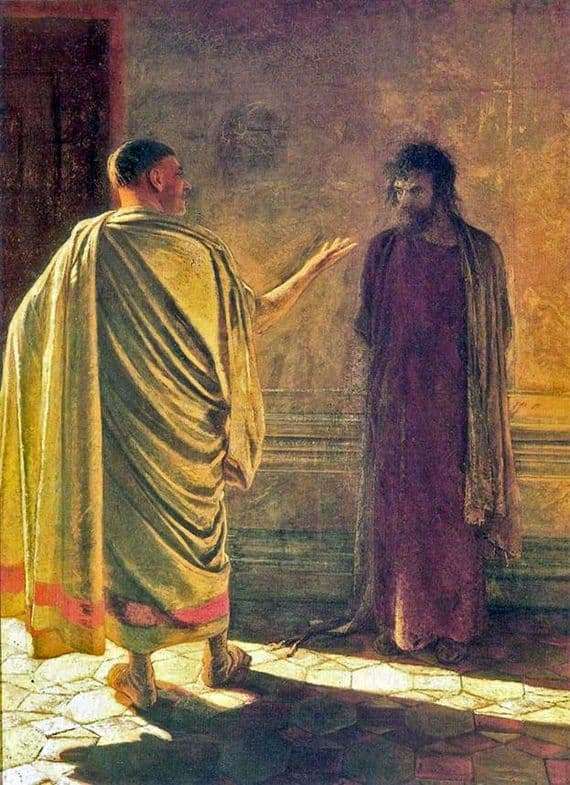 This picture is of interest not only because of its artistic component, but also because it has several oil layers. The artist at the time of creating the masterpiece was in distress, therefore, if society did not accept one of his works, he painted another on top of it.

The viewer in the picture can see Pilate coming out of the palace and unexpectedly meeting Jesus Christ. The ruler of Jerusalem stopped and arrogantly asked the martyr a question. He does not respond to it.

An interesting decision of the artist was the use of paints. Pilate, according to Christian doctrine, refers to the representatives of the dark side. But he performed on the canvas in bright colors. This is evidenced not only by the usual white toga, but also by the sunlight falling on it, apparently penetrating through the passage. And Jesus, on the contrary, is not just in the shadow. His clothes are woven as if not from cheap material, usually worn on prisoners, but something more expensive, but for some reason it is of a dark color.

A slight smile is visible on Pilate’s face, as if he is mocking his face over the fate of the prisoner. The same, in turn, humbly looks at the ruler of his lands, there is not a shadow of condemnation in his eyes directed against Pilate and his actions.

The difference in positions is confirmed by the shapes of the bodies of these heroes chosen by the artist. Pilate has a powerful figure, which occupies almost a third of the canvas. He is confident in himself, in his decision. And Jesus contrasts with him. The martyr seems to be cornered. Unlike Pilate, he hid his hands behind his back, thereby, as if wishing to get even more removed from what was happening.

Pilate fails to discern the truth hidden under the shadow of the saint’s slightly frown. Perhaps this is why Jesus is in darkness. The artist apparently wanted to show in this way that the truth of the saint rested far from Pilate.