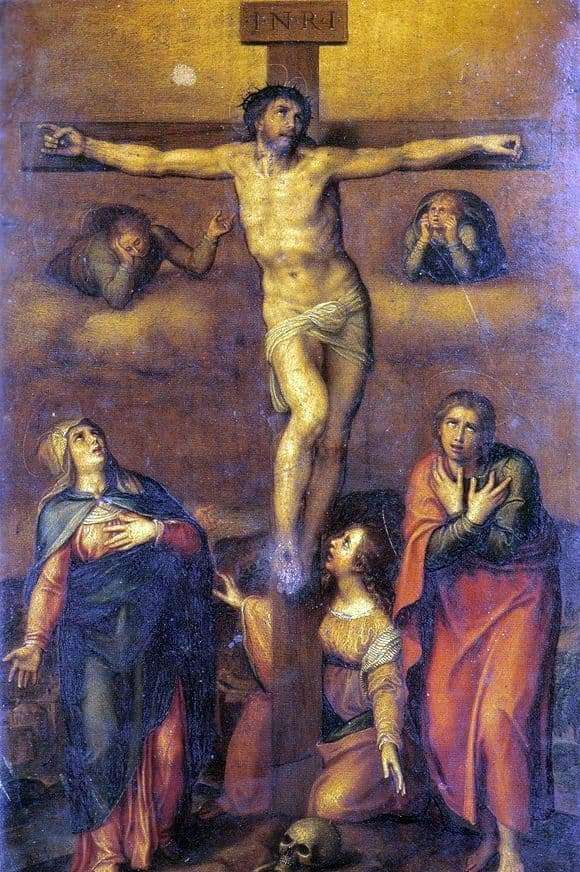 Many of the works of genius have been lost. This applies to his paintings, which did not survive in battle with time. Many can only guess from the written information of authoritative contemporaries of Michelangelo. Among such lost masterpieces are paintings of Lamentation, Resurrection, and the Crucifixion of Christ. All of them were carried out at the request of Vittoria Column, the beloved master. The love for this woman made the canvases particularly lively and sensual. They were able to cause genuine emotions, as evidenced by the memories of Vasari about the paintings he saw.

The crucifixion of Christ in the authorship of Michelangelo can not be called the next interpretation of biblical history. He portrayed his Jesus alive. Christ crucified with the artist remains with his eyes open. He turns them to heaven, to his father. Looking to heaven, Christ calls out to his parent. He makes alive the figure of Christ and the torment that his body still feels. It is not limp as in other variants of the crucifixion, but continues to struggle with pain. It can be seen muscle tension and suffering on the face, which allows you to speak with confidence about the power of suffering.

The Savior’s hands are impressive: the arrival of nails to the cross, they do not lose their freedom. Such openness makes the figure weak and strong at the same time: now there is nothing to be afraid of, and he was never going to hide anything. The slightly inclined figure is obtained from the slanting cross, but the light and shadow of the figure becomes almost flashy.

This is a loud appeal to the viewer, which attracts all the attention to the central figure of Christ and leaves the unassuming Mary and Jon at the foot of the instrument of torture almost without attention. The blurry language of the lines enhances the emotional component of the picture, which is enhanced with each subsequent option. Crucifixion does not lose its religious power, but acquires a new sound so necessary for the new time and worldview of the Renaissance.