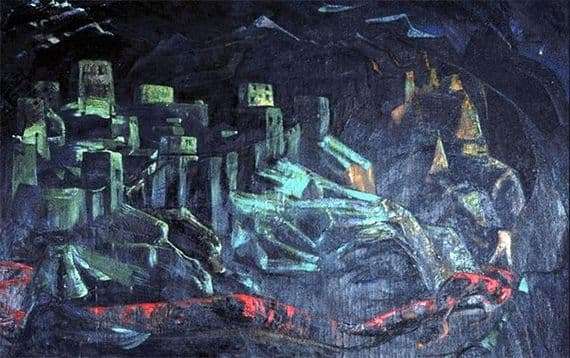 The painting depicts a mighty castle, which, apparently, no century is among the sharp rocks. The background is a formidable, almost black sky. The windows of the castle reflect a red glow, perhaps a raging battle nearby. The sky, filled with bloody colors, should symbolize the imminent onset of war. The scarlet shades are the symbol of the subsequent revolution.

These paints act as the main background for the future collapse of the castle, and hence the world around it. It creates a general impression of a certain inevitability, an inexorable course of history, sweeping away any creations of man in its path.

The castle is surrounded by the same blood-red dragon. He clogged all entrances and exits of the structure, not allowing residents to get out. The city is really doomed to inevitable death. The dragon leaves no choice: only death lies ahead.

Residents may not yet be aware of future events. In the windows there

is no glimpse of light, indicating that someone else is not sleeping. It’s night outside, so everyone sleeps. But only the dragon, streaming on sharp rocks, does not sleep. His head is tilted down, as if he was about to descend from the mountains. In fact, he is most likely looking for other ways of retreat for the inhabitants of the castle.

The main shade, chosen by Roerich for his work, was dark blue interspersed with white and red. Such a combination seems to inform the viewer that there is no one else in the castle. He will soon fall into disrepair. There will be only a skeleton of the structure, strong walls resting against the mountain ridge.

And yet, they will not give salvation. A new world will come, and the old one will disappear from the face of the planet. People will have to submit to the upcoming revolution, otherwise the dragon will devour them, as he has done with representatives of the human race more than once. It remains only to wait for the onset of dawn: then everything will happen.