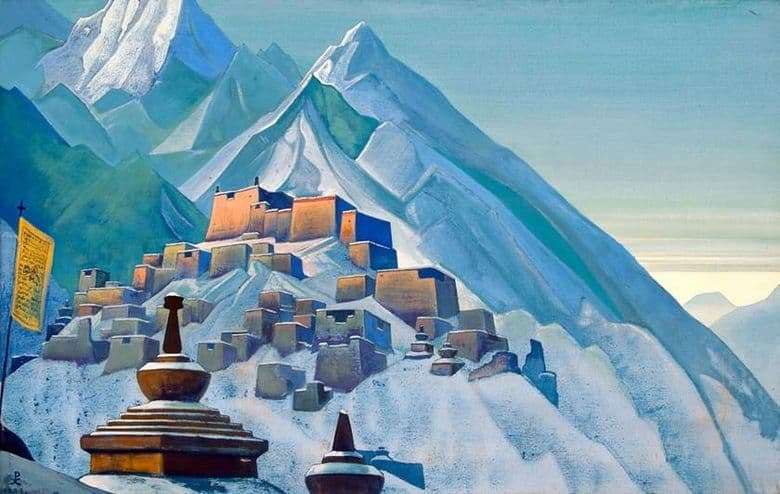 Painted painting “Tibet. Himalayas “was created by Roerich under the impression of the harsh winter, which he found during an expedition to Central Asia. The work is imbued with admiration for the greatness of the mountains and the thrill of being in a sacred place. The artist paints lovingly and with restraint on this island of traditional values, the remote cradle of cultural heritage, far from the hustle and soullessness of modern civilization.

Most of the composition is occupied by the snow-capped peaks of Tibet and the cold winter sky. At the foot of the heap settled down the houses of settlers, the modest turrets of Buddhist temples, gilded with the soft light of the setting sun.

The canvas is written in cold, restrained colors, which convey the winter coloring well. The artist worked using the techniques of tempera painting. This allowed the picture to be airy and foggy, as an elusive vision. The colors translate into one another delicately, do not irritate the eyes and seem to create a cool, weightless haze.

The sky was created using the technique of color stretching. Transparent blue gradually descends and dissolves in a bright, gentle horizon, where the silhouettes of distant peaks are guessed. Giant arrays create an image of calm confidence, indestructibility and sublimity. They do not crush their own power, and invite to taste the world, alien to greed, greed and other topical vices.

In this fabulous land, the Tibetan settlement is perhaps the last stronghold of the peaceful spirit. This is contemplation and wise conquest of the unhurried flow of life, the conscious acceptance of oneself and the “wheels” of life, its laws and ancient secrets.

The masterpiece by the great artist is kept in the open access “Museum of Nicholas Roerich, New York, USA.