Home ⇒ 🎨Dionysius ⇒ Description of the icon of Dionysius “Descent to Hell” 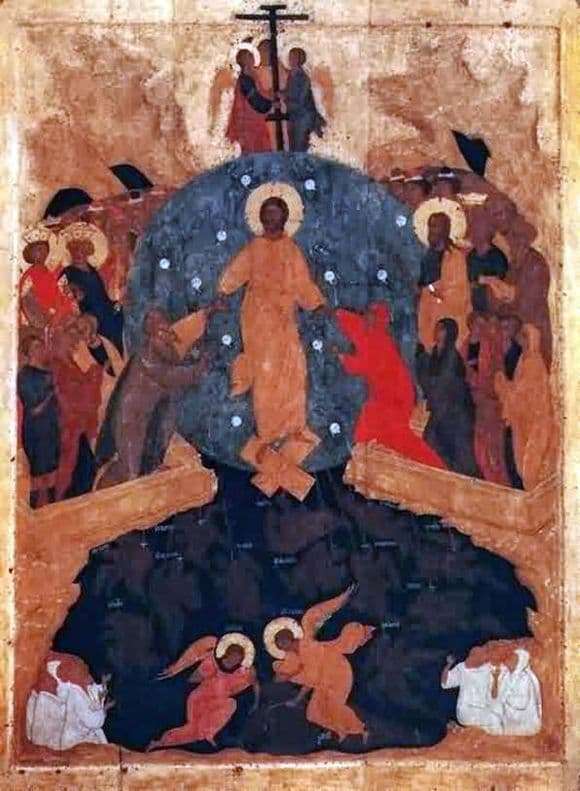 Dionysius is one of the founders of church painting. He lived and worked the artist in Moscow. Together with his students, he participated in the painting of walls and domes of church institutions, the image of icons and the design of iconostasis. For a long time, the master headed an art artel consisting of clergymen. They helped him to create religious masterpieces.

In 1502-1503, the work on the painting “Descent to Hell” was finished in the icon painter’s studio, Dionosius. The central figure of the painting is the image of Jesus Christ himself. To his right and left are ancestors and prophets. Angels winding around, piercing the bodies of demons. They symbolize the victory of the best qualities of man over his filth and vices.

Angels are also located at the bottom of the composition. Next to them are people resurrected after death. Complements the image of the cross. The picture is made in dark, heavy colors. Used characteristic of religious works of orange, blotches of red and brown.

When conducting Sunday services, church ministers often turn to the subject of the descent into the Hell of Christ. Hell in this case is the main. plot, symbolizing the resurrection. On the icons of Byzantium and in Ancient Russia such an image was considered canonical. It is the personification of the victory over death and evil.

However, in the Orthodox Church, this image is not used. For the icons of this trend of faith, the image of the resurrected Jesus Christ without the image of the symbolism of hell is more characteristic.