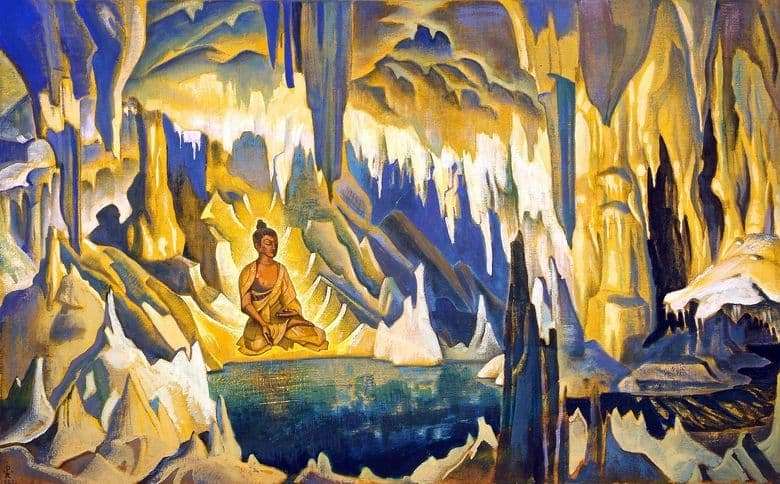 This picture of Nicholas Roerich, one might say, is an illustration of the ancient writings of the East. It is believed that this plot Roerich peeped at one of the Buddhist temples, rethought it a little and painted it on canvas.

The picture is very symbolic and takes us into the distant past, when the Buddha was still alive. On the canvas, we see a large cave in which the sage sits in the lotus position. According to the scriptures, these events existed in reality. It is believed that the Buddha wandered around the world for many years in search of truth. He decided to descend into the underworld, which was ruled by the all-powerful ruler of death. The underworld is an allegory of our consciousness. Buddha sinks deeply into his thoughts, begins to think about his actions, and thus finds great enlightenment. The God of death who rules in this underworld is nothing more than our temptations, passions, dissatisfaction. In this dark cave, the Buddha fought with the lord of death and defeated him.

Roerich depicted in this picture the moment when the Buddha had already defeated the evil king. One of the rocks, in the lower right corner of the picture, is very similar to the mouth of a terrible animal. Perhaps this is the defeated monster. The water near which the Buddha sits is the source of life. It is also called the source of knowledge.

Thus, we understand that this cave is not only a symbol of hell, hell, but also the embodiment of human ignorance, ignorance.

Nicholas Roerich, depicting a dungeon, uses mainly two colors: blue and yellow. They do not mix, but neatly overlap. It is noteworthy that the artist did not depict the source of illumination. It seems that Buddha himself is shining. The sage, having conquered all his fears and temptations, has become great, and this illumination comes from his figure. The pose, in which the Buddha is captured, is considered canonical. It is in this position that this sage is usually depicted.