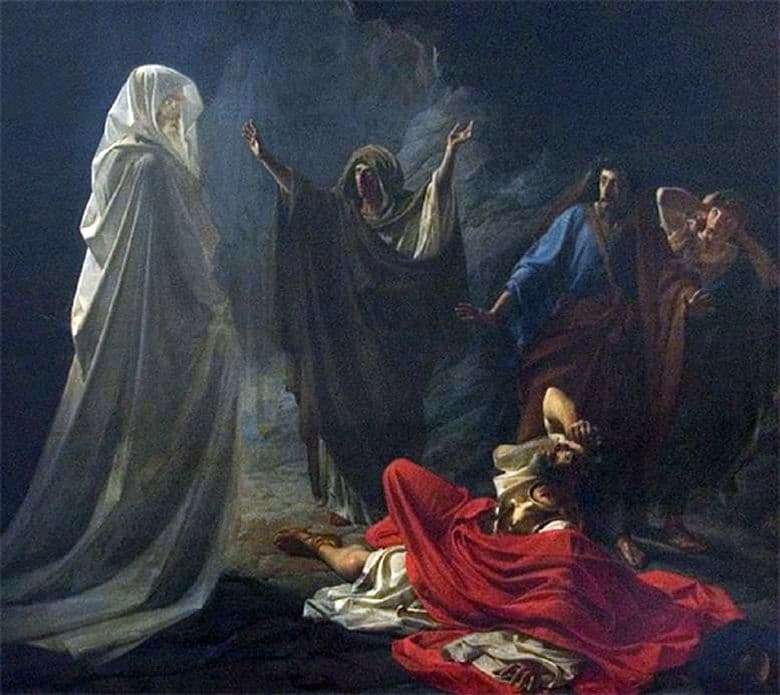 The picture was painted by Russian painter Nikolai Nikolayevich Ge on canvas with the help of oil in 1856. Its size is small. Only 288х341.

The picture is written in dark shades with bright color contrasts. The spirit is dressed in snow-white attire, and the king in a blood-red robe. This allows us to expressly highlight exactly these two figures on the rest of the dark background.

You can easily pay attention to the academic style of writing. You can also notice the following customs K. Bryullov.

The plot of the picture is as follows: preparing for the battle with the Philistines, King Saul appeals to a woman with magical abilities to predict his future – he stopped dreaming and he began to believe that his connection with God was lost.

But it’s not so easy to find a sorceress. Saul personally ordered his subordinates to drive out all the wizards and sorcerers, fearing curses and corruption.

she appeared at the sorceress, she asked Saul: “What kind of person do you intend to call the spirit, great king?”. Saul’s decision was not predictable – he wanted to know the answer from the deceased Samuel. This was the one that, even with its existence, predicted the death of the king and all his heirs by blood.

Saul wants another prophecy from Samuel. But the spirit of the deceased communicates the same message that he spoke during his life – in preparation for the battle with the Philistines, the king will perish. Saul, unhappy and completely without power, falls to the floor, losing the chance for all hope. This moment and captured on his canvas Ge.

Who was really the king? Was this really the real spirit of Samuel? Or maybe this is the work of a simple charlatan? It is these questions that have become of concern to people at all times, overexposed to topics for long discussions.

The artist had no goal to embody the whole truth in his picture. He professionally reflects the biblical history in the exact form in which it has reached our days.