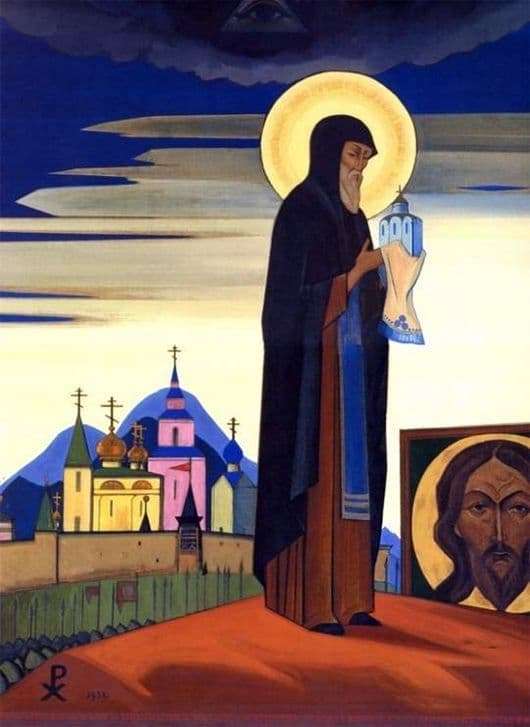 The painting of St. Sergius of Radonezh by Nicholas Roerich, painted in 1932, depicts St. Sergius. Love for the image of this wonderworker Roerich carried through his whole life.

Saint Sergius stands in the foreground, on a hill of color resembling the color of unbaked clay. His figure is tall and stately, harmonious in everything, his face is majestic and kind, and a halo, clothes and a sign of the trinity make us understand his high position, emphasize his power and significance. In his hands he holds a beautiful temple – a symbol of the temple of the human soul. Wonderworker Sergius instructs the army and prays for his safe return.

Helmets of warriors marching on a feat of arms are visible over the hill. They walk in straight rows, proudly carrying red banners. They go into battle bravely and with dignity, realizing the power of the help of St. Sergius and the Russian Church, standing far away and painted with surprisingly matching colors. Even in the sky, manifestations of heavenly help are visible: it is unusually blue and turns into snow-white-yellow shades, as if from the brightness of the halo and the spiritual light of Sergius. Yes, and dirty clouds are cleared, becoming whiter, which symbolizes the purification of the earth from various vices and bad thoughts.

The All-Seeing Eye, clearly emerging through the thick black clouds, is the eye of the Creator, which is far away and invisible to people, but still constantly watching them and keeping them. In general, in the early Russian icons one can often see the Eye, but in such late works it appears rather rarely.

The whole canvas is saturated with spirituality, on the right below even the wine is an icon with the Face of Christ the Savior.

The greatest devotee of the Russian land, Saint Sergius, is an image of an educator, teacher, and intercessor for the whole people and at all times. During his lifetime, this man was trying with all his might to unite Russia and achieve its moral rebirth. He rallied the warriors before many campaigns, and it was in this image that he appeared before us in this picture.