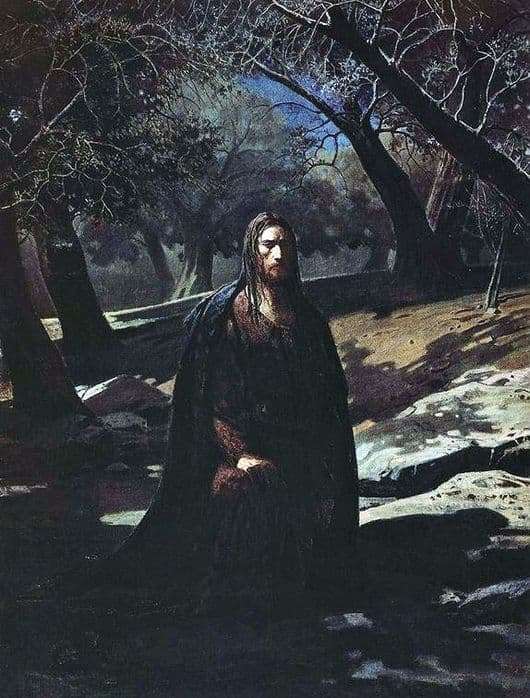 Nikolai Ge does not deviate from the religious theme, and writes “Christ in the Garden of Gethsemane.” He made this creation from 1869 to 1880. He is criticized and forced to believe in mediocrity, but after a while the author reworks his canvas, and then the critics fall silent.

This painting is recognized as one of the masterpieces of the great artist. To draw it took several years of rethinking and studying their work. There was a daily work on himself and the suppression of unflattering cries to the works of the author.

Ge N. N. shows the viewer of Christ, who is ready to part his hands. Very little is left before his crucifixion, Jesus is tired and, nevertheless, believes in the power of his supreme father. In the Garden of Gethsemane, he is tormented by doubts and struggles with his fears. He knows his purpose, but it is quite difficult for him to agree with this to the end.

The main technique of the artist is that he writes all his paintings without sketches and sketches. Nicholas believes that you need to write with your heart, and the amendments and extra sketches give rise to doubt and incorrect perception of the form.

He represented in his head what Jesus looked like in the last hours before the crucifixion. On the face of the savior, we see anxiety, but not despair. The main character of the canvas turns to his creator for understanding and for him to accept him in his immense embrace. He asks for forgiveness for not being able to set people on the path of truth.

Christ is confident that the sacrifice will be in vain, only through pain and death does true faith manifest. Speaking with his father, the hero experiences anxious excitement and mad fatigue. His robe was disheveled just like the soul of great sinners. Completely alone in a dark forest, he turns up and knows that there he is heard and forgive.

This canvas will be exhibited at closed exhibitions for a long time. About him will say good and bad. Ge Nicholas will understand that this is real success.