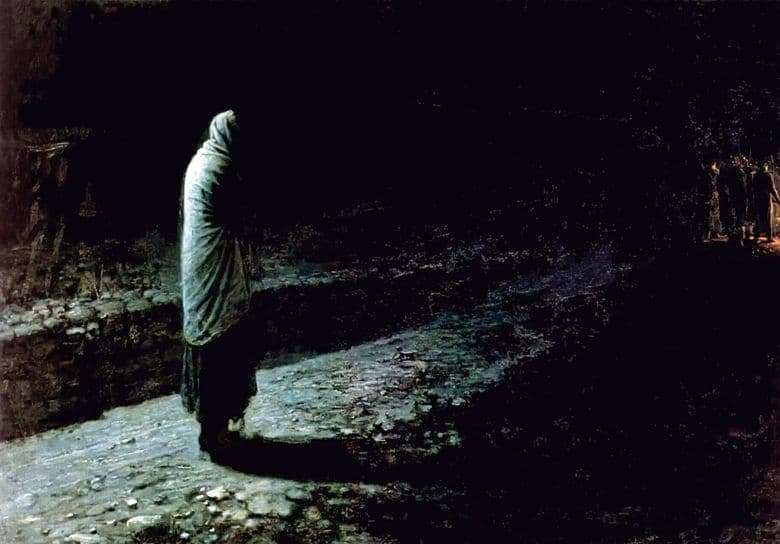 The painting “Conscience. Judas” Nikolai Nikolayevich Gay refers the viewer to the biblical story of the thirteenth apostle, who sold his Master for thirty silver coins. The exposure, tones and colors used in the creation of this canvas are very peculiar: the dark, almost black picture suppresses and disturbs with its dark, oppressive atmosphere, and only a tiny glimpse of live warm light flickers away. There, where barely discernible figures of people went away along the stone road.

The central character of the painting, in which Judas is marked, stands in the foreground, with his back to the viewer, completely wrapped in a long robe. He is completely hidden, but even his posture expresses the desolation of broken hopes. The deal did not bring him enrichment; Judah is alone and abandoned. He stands in the faint rays of the moon, his eyes fixed on the distance, at life, which slowly leaves him with a group of people leading Christ to the coming judgment and crucifixion. It seems that in these moments he is acutely experiencing emotional disruption, recalls what he owned, and what is now completely lost for him. Judas is rejected from the society of people, which is visible in every small detail of the picture.

His loneliness and alienity are underlined by the play of light and shadow. The expressiveness of the composition is especially bright by the opposition of the lighting artist selected. These two points, which look against the will, draws attention. A large spot of whitish night light, ghostly and cold, in which Judas bathes, is contrasted, as it were, with a warm, lively, albeit disturbing gleam of fire carried by people in the far part of the picture.

The composition of the etude is interestingly built: the road and two points of illumination create a straight tunnel, traveling along which, the viewer’s view as if plunges into the world created by the artist’s brush.