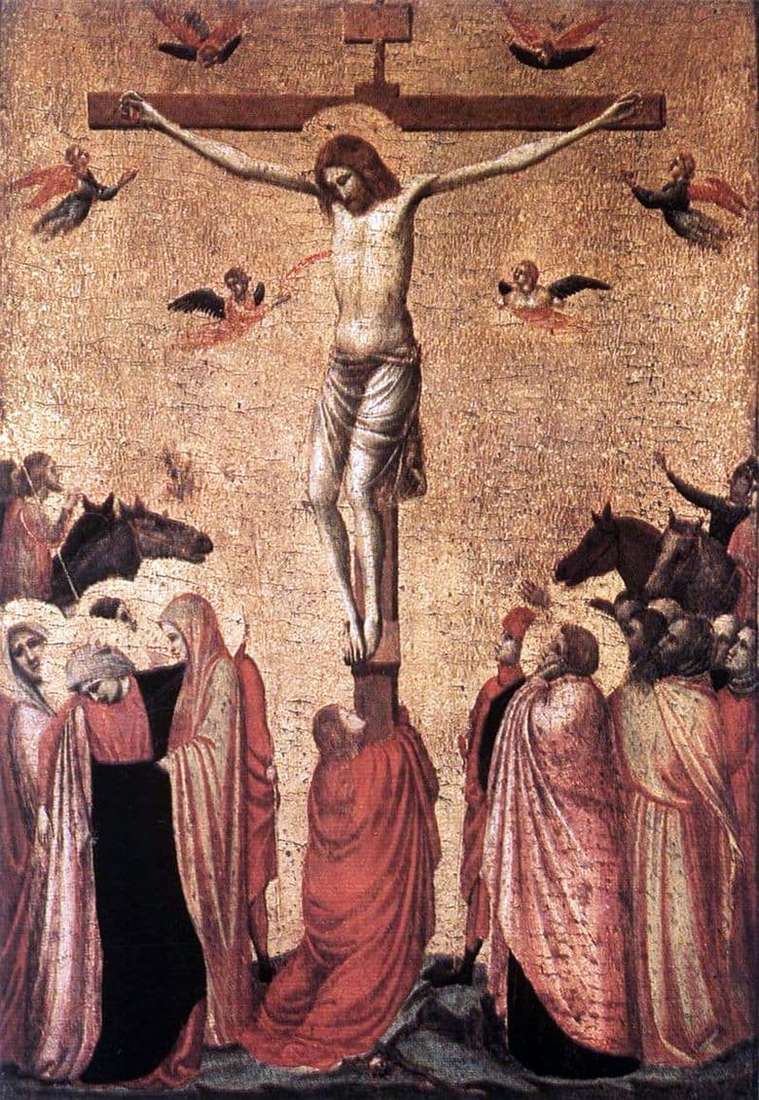 1330; board, tempera; Municipal Museum of Strasbourg.

The role of Giotto di Bondone in the development of Italian pictorial art is difficult to overestimate. It was thanks to him that a completely new approach to the image of the spatial dimension in the pictures appeared; they got depth and volume. Mostly the artist worked on the painting of churches, images of frescoes, icons. In his work dominated by traditional motifs of Christian myths, but the hand of the master is recognizable in each of his creations.

“The Crucifixion of Christ” captured the tragic moment of the death of the Son of God on Mount Calvary. The thin white figure of the Savior is the center of the picture. It is as if Christ is floating in the air, barely held by the cross-beams. A nimbus above his bowed head closes the supporting pillar, and it seems that the arms outstretched to the sides hover in the air, while holding the crossbar on their shoulders.

A figure wrapped in a scarlet cloak fell to the pillar at the feet of Christ in a frenzy rush. Who is this woman? Mary Magdalene, repentant harlot? On the left hand of the hanging figure, on the ground, a group of four women, their heads filled with haloes. In the center is an old woman in a black mourning cloak with her head covered, grieving mother. To the right of Christ are his apostles, looking at the savior with sadness and fear. Above the head of one of them is also a nimbus of holiness.

In the background are visible horse guards with peaks, guarding Christ. They look confused, their eyes are fixed on the sky where angels soar. All of them are in black with red wings, except two, at the very top of the cross, wearing red attire and black wings.

It is striking a thorough study of all the details: the picture is filled with life and tragedy, but not despair. The pacification and rest on the face of Christ leave the gracious sensation of the viewer, the feeling of hope, of sharing something great.