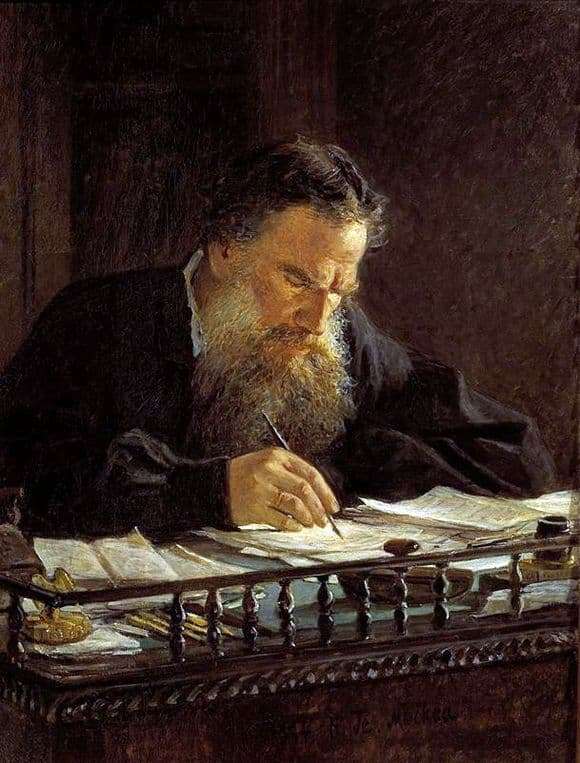 Lev Nikolaevich Tolstoy was an amazing man and caused delight and inspiration from his readers. Among the latter was the artist Nikolai Nikolayevich Ge. In 1884, Ge will write a portrait of the writer in his house in Khamovniki. During the creative process, the writer and artist will get close and will find a lot in common in relation to the moral character of society.

Much to the surprise, but this portrait was not perceived in the best way. Many complained about the failure of the chosen angle – the writer’s head is lowered, and his face is completely invisible. However, Nikolai Nikolayevich himself was pleased with the result of his work and noted that he had managed to catch the most important quality of L. N. Tolstoy, namely the ability to work hard and diligently. It is worth noting the harmony of the creative process, because the writer did not like to pose. However, Ge built the work in complete unity with Lev Tolstoy’s

then-running work on the treatise “What is my faith?”. The master often came to visit the house of Tolstoy, spent hours with the writer and, at times, just watched him.

The portrait of the writer is captured in the office, in a familiar working environment. Everything around is natural, simple. But thanks to the ordinary and external artlessness, all the attention of the audience is directed to the writer. He did his best to reflect the power and genius of the writer’s mind, the deep and thoughtful process of his work. The philosopher and thinker bent over the manuscript and seems to hear the creak of a feather, which diligently prints immortal lines on paper.

The poverty of colors does not detract from the picturesque portrait, the light pouring from the side gently flows from cold to warm. Again, the neutrality of the background does not distract from the writer’s face, which is sealed in a new, unconventional for the psychological portrait of the time, manner. The view of Tolstoy is not directed at the viewer, he is turned to the article. The writer is immersed in the process with his head, forgetting about reality. In this dedication and complete dedication, Ge saw a special form of manifestation of heroism. That is what he endures and emphasizes in the first place. In the portrait of the artist Lev Nikolayevich Tolstoy is a great worker and teacher of life.