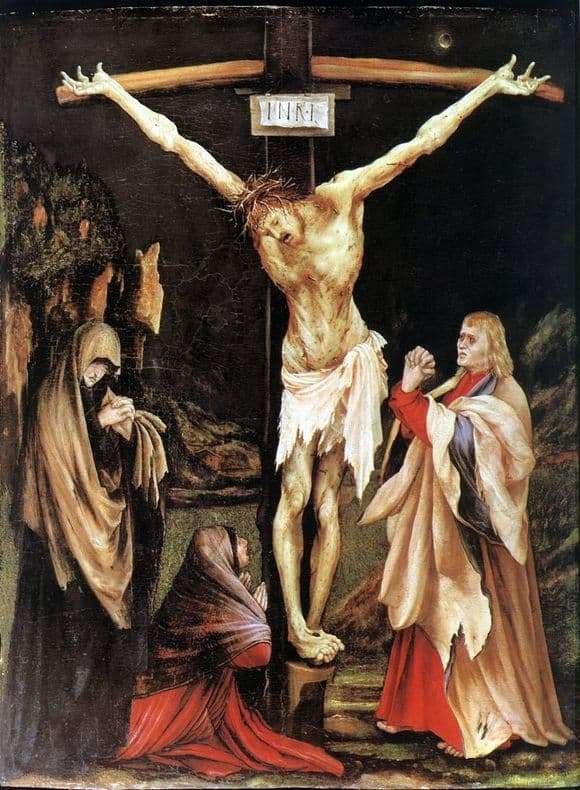 In the picture we see a traditional religious plot – the crucified Jesus and those close to him gathered around him. If you try to characterize the impression that this creation leaves in one word, it will be despair.

We see a mutilated, painfully thin, male figure with a truly martyred face on a black background. The colors are very saturated, and the light figure stands out brightly on the dark. Facial expressions are incredibly emotional.

It should be noted that human figures are much smaller compared to Jesus, which emphasizes his holiness and makes him stand out from the rest. This technique is typical of medieval painting: the size of the figures is determined not by the desire to reflect reality, but by the desire to show which of them is of greater importance than the rest.

The picture is somewhat like a bad dream, imprinted in the brain. The hands of Christ are disproportionately long, and the fingers are twisted and crooked, as if they were squeezed by the last death spasm, the whole body is disfigured by torture, thorns of blackthorn stick here and there. The poses of Mary Magdalene and John the Baptist reinforce the impression of a nightmare. Holding something like a rag in his right hand, John seems to be pointing at the body of Jesus, his gaze directed into the unknown. Mary Magdalene, kneeling and folding her hands as if in prayer, stretches them towards Jesus.

The bloody figure looks down at the sympathizers from the top down with their mouth parted, with an empty, aloof look. It seems that he is about to give up the spirit and retire to another world.

The artist pays a lot of attention to his hands, they serve him as a tool for transmitting emotions: women have beautiful, white and thin fingers intertwined in prayer, the fingers of Jesus are martyred, crooked, frighteningly scary, pierced with pain.