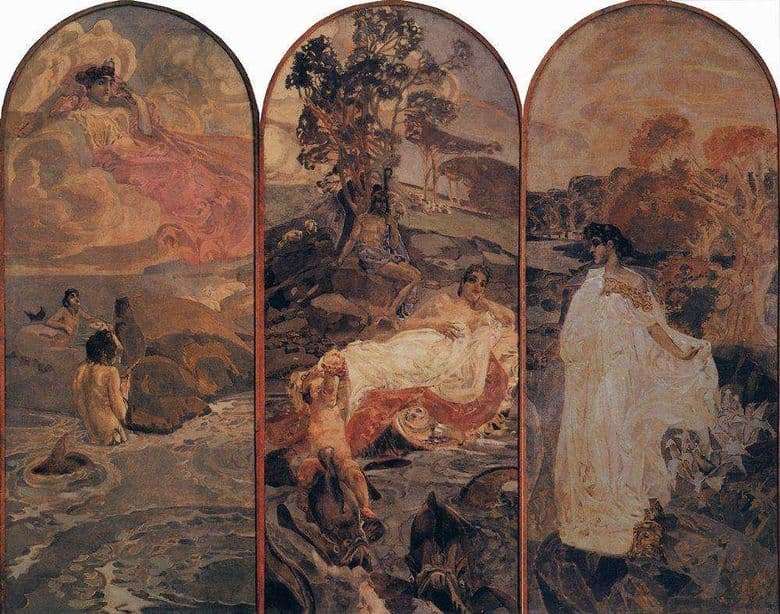 Mikhail Vrubel is one of those Russian artists who became the father of Russian modern. It is the elements of modernity that the master used to create the unique masterpiece “Judgment of Paris”. Vrubel used more precise lines, ornaments that have a hidden and deep meaning, and calligraphy was added to this technique.

Vrubel’s picture was made according to the plot of a famous myth in ancient Greek mythology, according to which the shepherd Paris decides to punish three goddesses. The masterpiece hides in itself the consequences of the decision that Paris took, and the consequence was the Trojan War.

If you look at the picture, you can see that on the left side there is a beautiful sky in front of the viewer, in the clouds of which there is a beautiful Juno, who promised Paris to give power over Asia. In the sea you can see young men who have tails like those of mermaids, and on the right is the goddess of wisdom Minerva, who promised fame to Paris in exchange for receiving the coveted apple. In the center of the triptych, you can see Paris himself, who herds the sheep, and in front of us the beautiful Venus basks in the sun. The picture also shows the cupid, who miraculously saddled the dolphin and holds the coveted and desired apple over Venus’s head. The goddess of beauty promised Paris mutual love and joy, and Paris could not refuse the temptation to know love.

The painting was made in the style of the Renaissance and in muted lilac tones, which the customer did not like in the future. This image of a famous scene from mythology, gives food for thought about life, love and glory. Each viewer looking at the picture probably condemns Paris, who passed the apple to Venus, maybe he should have made a different choice and thus avoid a bloody war.