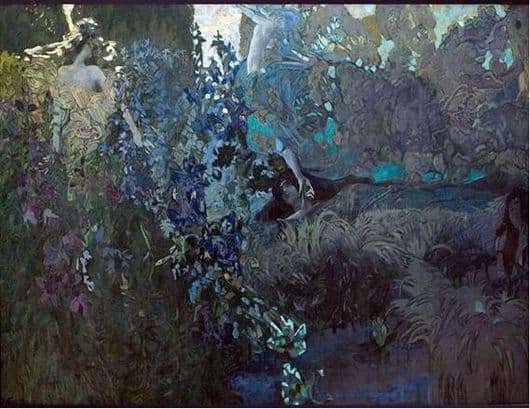 Art lovers call Mikhail Alexandrovich Vrubel the mysterious genius of painting. Why such an opinion? Analyzing all the works on genres, in each you can see the conflict, non-existent things for reality. Mikhail Alexandrovich was so entrusted with his thoughts that even the most real plot of the picture turned into something not experienced by man. It cannot be said that the artist was an excessive inventor, but nevertheless caused bewilderment in some viewers of his works.

A masterpiece “Morning” is a genre that combines nature and people. The work is written in oil on a large canvas. The technique of images is thin and unique, you are not distracted by one image, but you immediately see several faces among the trees. Looking at the picture, the viewer sees the nature that personifies the mermaids. The texture of deciduous branches, thick grass, as if hid the image of a girl. She, apparently, is reborn from greenery, and reaches for the sky. Patterns of plants create an ornament dress, reflecting all the flames of the rising light.

The presence of contrasts shows smooth transitions of static tones to movements – this is expressed by the moment of awakening, from peace to the rebirth of the soul. The figures on the panel express feelings of love and despair at the same time. The colors that prevail in the picture of blue and green hues, tonality stabilizes Mikhail Alexandrovich’s calm.

The panel expresses the struggle between good and evil, which are expressed by allegorical images. Many-valued and comprehensive colors give the viewer a calm and cold sounds of Vrubel’s emotions. Mystery and superiority – the key basis of the artist.

By striving for the highest steps in art, Mikhail Alexandrovich Vrubel gave the connoisseurs of painting a pleasant feeling of real and fairy worlds at the same time.