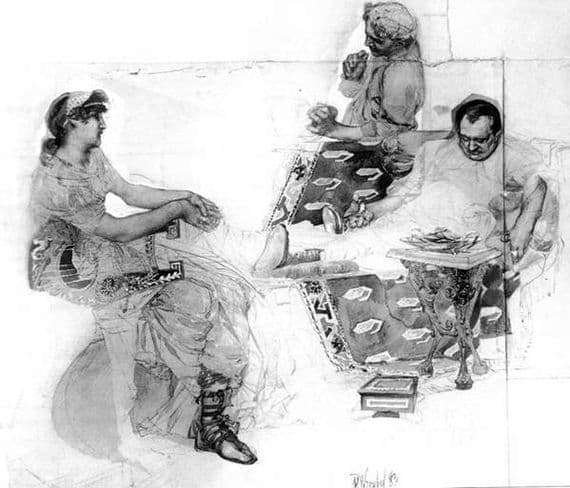 During his life Vrubel managed to work in almost all techniques known to mankind. He wrote with a brush, drew with a pencil, used all paints that were tucked under his arm. He was constantly looking for the best way to reflect the reality in art and never dwelt on one thing. He even sculpted sculptures and participated in the life of the theater – a constant vigorous activity, irrepressible energy were his companions and his defining features.

“The Feast of the Romans” is not a picture in full. This is a sketch made in pencil and watercolor, unfinished and leaving a feeling of some kind of surrealism. Some details are worked out to the smallest detail – the face of a dormant man, a musical instrument in the hands of a woman – while others are barely marked out and break into emptiness without regret.

The whole picture seems to be drowning in a hazy mist, but this leaves more the feeling that the moment was snatched by the artist from the past and thrown onto paper as a whole, than the feeling of pernicious incompleteness. It is present, but is rather an addition, revealing the meaning, than a disadvantage.

Three people in the picture indulge in rest and do it for a long time. The woman is no longer playing, her fingers are not on the strings, but are relaxedly linked into a lock. She looks into space, slightly bowing her head, as if hoping to see some meaning in what is happening.

An obese man slumbers right above the plate – the cup of wine in his fingers is dangerously tilted, ready to fall and roll on the floor, fortunately, there is no liquid in it.

The third man is thinking. He has a strict profile, his face can not be seen.

All these people look like they are terribly tired of themselves. As if they were tired of senseless rest and boredom, as if they already did not care what would happen next.

And the empty feast drowns in the haze of time.