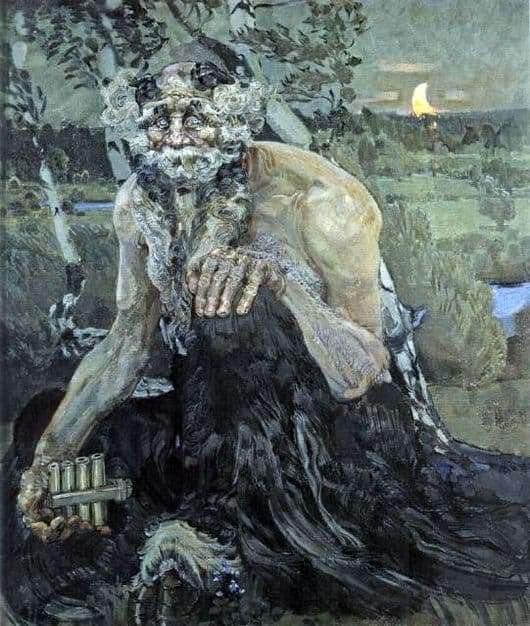 Before us is the famous painting by Mikhail Vrubel “Pan”, written by him in 1899 in the Orlovschina in the estate of M. Tenisheva, a famous Russian philanthropist.

What do you see when looking at the image in the foreground? Man is not man? Goblin is not goblin? A creature from a Russian fairy tale steadfastly guarding natural resources.

Behind, behind the main figure, a real evening landscape with clearly traced lines of thin-bore trees, few plants near the water at the marsh. The plot complements the well-defined horn of the moon, which illuminates the mysterious forest, the shore and the creature itself, sitting in the foreground.

What is this creature? It looks like an ancient Greek mythological creature guarding herds of sacred goats and sheep. Here in his hand he has an indispensable attribute of a shepherd – a pipe, the sounds of which he attracts dispersed animals.

He vigilantly watches everything that happens around. But his eyes are blue, kind, a little sly. Such eyes may be the old grandfather, telling fabulous stories to grandchildren. Or the character of Russian fairy tales – the goblin who guards forests and swamps, but does not harm people.

A gray-haired beard, tangled disheveled hairs, two black horns protruding on a broad forehead, powerful hands with long crooked fingers and a goat face below. Strange creature. It is all the more unusual to see him against the background of the Russian landscape.

“Pan” by Mikhail Vrubel appeared due to the strong impression that the artist received after reading the story of Anatol Franz (French writer) “Saint Satyr”. The idea of the picture was formed quickly, so the canvas itself was created in a few days.

Moreover, at this time the master was influenced by ideas about the search for a national soul. The artist refers to the plots of Russian fairy tales and, in addition to “Pan”, creates a cycle of “nocturnes”, among which are “The Swan Princess”, “Lilac”.