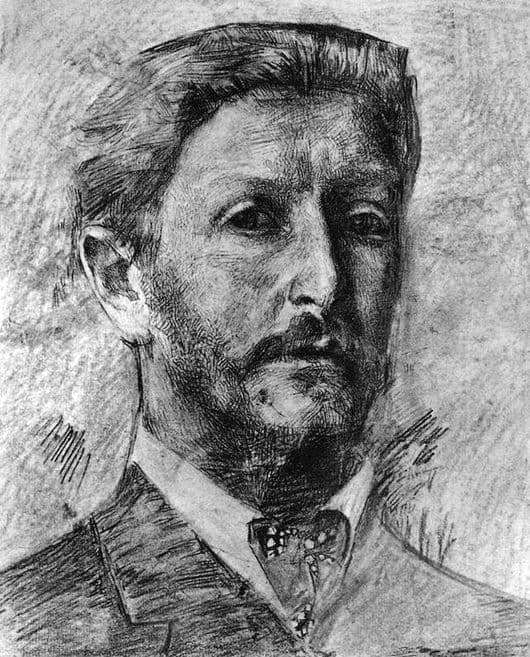 Self-portrait is the most interesting genre, as each artist somewhat deviates from his own creative features when writing himself. In addition, often the real appearance of the artist may strikingly differ from the self-portrait. But in this case, the image of himself as an artist is transmitted surprisingly precisely and unusually.

In the self-portrait of Vrubel, we see a middle-aged man. He is dressed in a suit, he looks aristocratic. A man looks handsome and solid, he looks about 40-45 years old. He does not look like an official, he does not look like a clergyman. Its appearance in some invisible way gives a creative nature. Under the jacket at Vrubel, a white shirt with a high collar, in place of a tie is a motley cravat.

The artist has thin, neat facial features, he is thin. The head is slightly raised, the artist looks down at the viewer. However, in his view it is impossible to read arrogance. He looks sadly.

On the face of the artist neat mustache and a small beard. Hair carefully combed back. Hair artist with a clear gray, wrinkles visible around the eyes.

The portrait is drawn in black and white pencil gamut. The face is drawn very clearly with the smallest details, the realisticness of the portrait is comparable to a photographic image. And the background of the painting and the clothes of the artist himself are depicted by sweeping, indistinct lines peculiar to Vrubel.

Thus, he once again emphasized the absence of special significance in these details, however, without them the self-portrait would not be complete. In the end, we see a picture that, at first glance, looks like a sketch, a kind of cartoon made with a pencil in a short period of time. However, peering into the portrait, in front of us, the perfection of the details and the enormous work that the artist has invested in this portrait come out more clearly and distinctly.