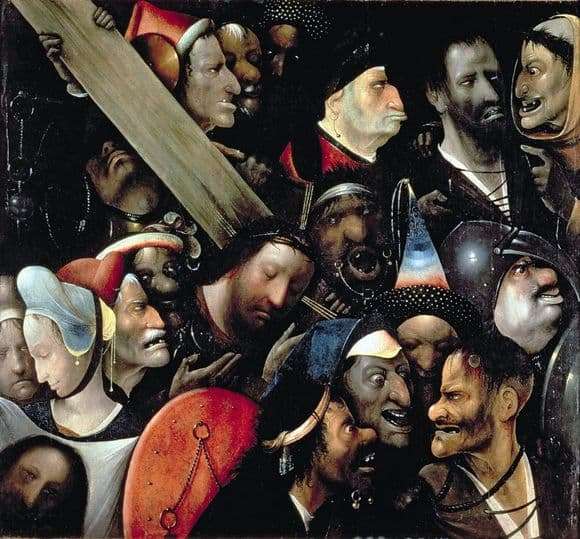 Bosch is one of the masters of the Northern Renaissance, whose style is still difficult for experts to determine. It is said that he was a madman or sectarian. With his paintings, he described the black magic that he was engaged in or witnessed. Or that he was a surrealist, splashing images on canvas directly from the subconscious – often his name pops up along with the name of Salvador Dali.

In any case, Bosch’s paintings are written in the technique of “Alla Prima”, which involves putting paint on canvas not in several layers, but in one, without a long wait, and are full of monsters, unobvious interpretations and deep meanings. Some people are delighted. Some have disgust.

“Carrying the Cross” is one of his paintings on religious themes. It has only one plan, approximate as much as possible. He creates a feeling of a static cinematic frame from a creepy animation tape about the ascent of Christ to Calvary. Only faces can be distinguished in a picture, and these faces are extremely unpleasant.

Hypertrophied noses, gaping mouths, lack of teeth, rage, disgust, condescension, mockery – they cause disgust and desire to quickly turn away. Among them there is a repentant robber who wishes to die, whose face seems to be already dead, gray, and two other robbers who scream violently and hate the whole world. There are Pharisees and priests, and in all the abominable bacchanalia only Christ with a cross on his shoulders and Saint Veronica with a cloth seems normal.

Their faces are bright, their features are full of serenity and peace, their eyes are closed, shielding them from what is happening around the abominable act.

The moment itself – the ascent, the bearing of the cross – the triumph of stupidity, meanness, hatred, envy, pride, selfishness and avarice that from Bosch’s picture is understood just perfectly.