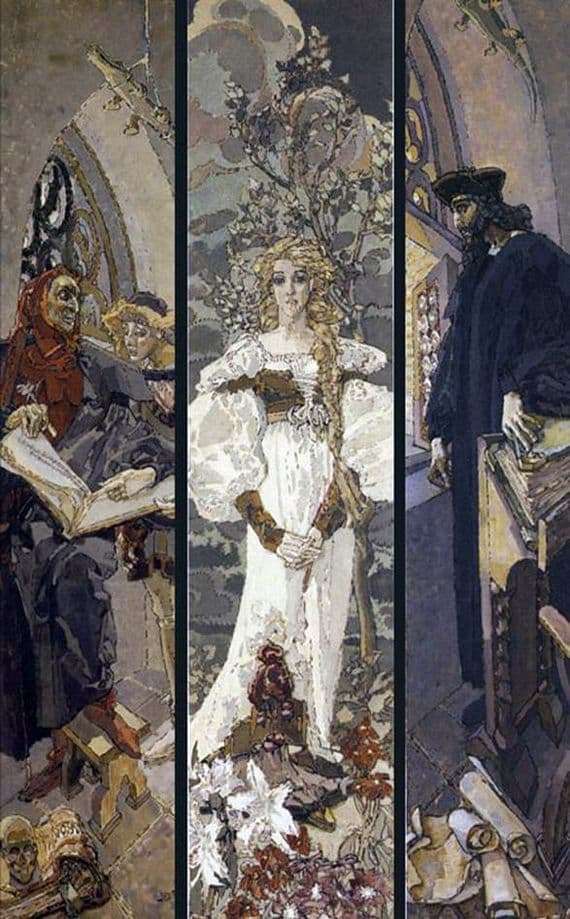 Vrubel is a Russian artist who wrote in almost all the techniques and genres, who searched his tirelessly and with vigorous energy, preferring the mythical and literary plot. Triptych “Faust” was ordered to him by a rich merchant who wanted to have his own picture. With enthusiasm, the master set to work, and created a real masterpiece.

In the center of work – Margarita. In a white dress, with a long blond braid, with clean bright eyes, she looks at the viewer with humble melancholy, like a deer, which knows for sure that the hunter is already following the trail. Her hands are folded on the stomach. Hair even in a braid fancy curly. There is a certain disproportion in the whole figure, stretching upwards, because of which the neck and arms of Margarita are too long, and because of this it seems that she grows out of flowers, and will be torn off like a flower, and left to wither.

with a young student. They are in a real laboratory of a medieval alchemist. A stuffed crocodile hangs from the ceiling, a skull lies on the pages of an ancient fancy book. Mephistopheles is in a strange, broken pose – it is difficult to understand that with the prospect of his figure, can she really wriggle out like that. One leg of him is on a stool, on his knee is a huge heavy book that it would be difficult to hold in his hands. A young student looks into her – on his face is surprise, fear and disgust of secret knowledge.

Right – Faust. There is also a stuffed crocodile under its ceiling, but there is no skull, no ancient books, only paper scrolls and a pulpit with a lonely volume lying on it. Faust stands, peering out the window, his face relaxed and soft, as if he sees something good. He himself looks like a wise scholar. Gray-haired beard, blue mantle. It is hard to believe that this man is so boring to bargain with the demon.

But a little more and – “I’m bored, the devil.” The story will begin.