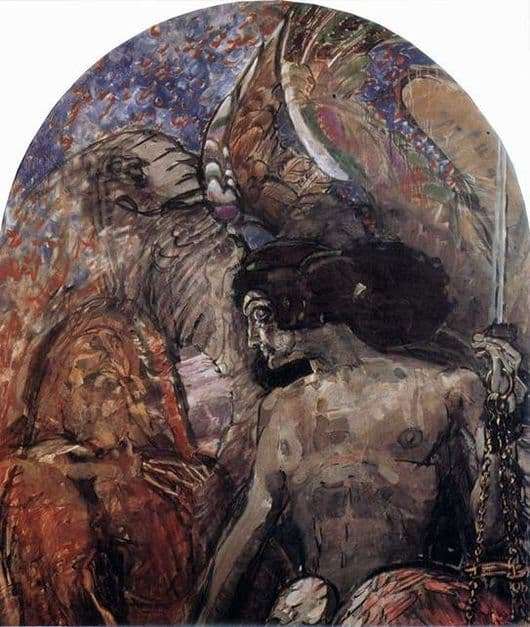 Mikhail Vrubel first turned to the poetry of Alexander Pushkin in his work in 1896, when he was looking for a fresh plot for a panel at the Nizhny Novgorod Fair. The artist was particularly interested in the poem “The Prophet”, however, at that time the idea was never realized. Only a sketch remains.

The image of the Prophet became an integral part of the Vrubel fantasies, which, under the influence of a serious illness, accompanied by hallucinations, painted metamorphosis plots.

The painting “The Prophet”, matured and born in 1898, combines two canons of composition. This technique was used in practice for the first time and then was often used by the author in his works.

Interestingly, Vrubel originally wrote the “Prophet” in full growth. Later, the artist himself, for reasons known only to him, cut off the lower part of the work and left the whole upper. The lower half has healed its own life. She became the backdrop to the work “Lady in Purple”.

V. D. Milioti often recalled the strangeness of Vrubel. He wrote that he had observed many paintings in the artist’s studio, the composition of which was cut on the back in the middle.

Later there were numerous interpretations of the first “Prophet” on the topic of the poem by A. S. Pushkin. The features of the face of Seraphim smoothly flow into the familiar face of the artist’s wife. The Prophet himself became an almost self-portrayed image of the author.

Everything was so messed up in the sick mind of Vrubel that in the last years of his life he was simply unable to distinguish fantasy from reality. Manic psychosis forced him to work every day more and more. The artist accepted death as a purification in 1910.