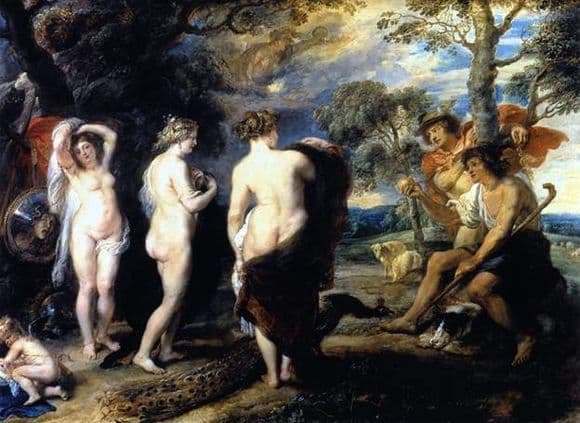 Rubens wrote on this popular subject of ancient times a number of magnificent paintings. Why was he attracted by this topic? The artist liked that it is possible to depict nude female bodies on the grand background of a magnificent landscape.

We see Paris. He wears a traditional shepherd outfit. He very carefully considers the three beauties. They are completely naked. Nothing should distract from a responsible choice. We see that Paris really likes the three goddesses. Impressive elegance of their poses. In the hands of Mercury, a coveted apple. It will be the reward.

Venus is depicted accompanied by her son Cupid, Athena with an owl, and Hera with a constant peacock. We see how gentle all three goddesses are. It seems that they are calmly waiting for the decision of Paris. It seems that nothing at all foreshadows so disastrous consequences, which led to the choice that made Paris. As is known, it led to the beginning of a destructive war in Troy.

Who is Paris? This is the son of the king of Troy Priam. Even at birth he was predicted that because of him the whole country would perish. The father ordered the baby to be accommodated. The servant took pity on the child and simply left him on the mountain. Shepherds found the child and raised.

Paris must decide which goddess is the most beautiful. Golden Apple has become a prize. Juno promised him the opportunity to become the most powerful ruler; Minerva promised that he would be a great hero. Venus also promised the love of a beautiful woman. The choice of Paris was predetermined. He decided to call beauty just Venus. But the other two goddesses were very offended. Paris decides to just kidnap Elena. As a result, the war began, as a result of which Troy was completely destroyed.

The richness of colors and juicy coloring of Rubens is impressive. He was able to masterfully convey the beauty of the female body and the magnificence of virgin nature.