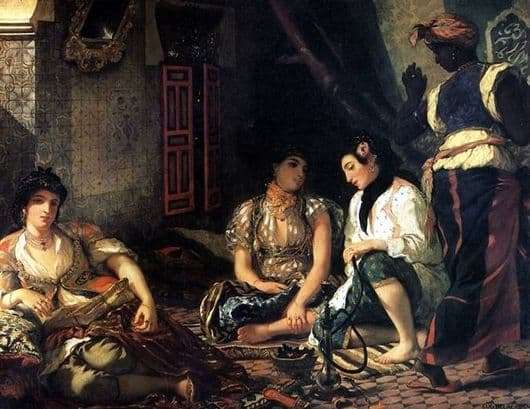 The painting “Algerian women” (often “Algerian women in their chambers”) was painted by Eugene Delacroix in 1834 and later served as an inspiration for Picasso, Matisse and Renoir.

The artist was greatly impressed by the harem that he saw in Algeria during his trip to North Africa. Being a guest of one sultan, Delacroix was very lucky to get into the holy of holies of the Muslim world, where he appeared in his beauty concubines, who became the heroines of the painting “Arab Women”. Despite the fact that their life did not differ from ordinary life, and women were not such romantic natures as they appeared on the canvas.

Four women of different races and nationalities sit on carpets with pillows and smoke hookah. Black concubine goes beyond the picture, something to say in the end to the remaining girls. The faces of the latter are filled with peace and femininity, and poses are relaxed and imposing. Each of them looks with a hazy look into the distance and it is not entirely clear what exactly he expresses: pacification, sadness, longing… Or is this mist in the eyes of the result of a hookah acting on the fragile girls? The clothes of the concubines are varied, but the most elegant outfit is on the left. And although her rings and necklaces are slightly different from the decorations of other women, we can assume that she is listed as a favorite of the Sultan.

In this picture, the artist, in the opinion of many experts, begins his experiments with color and adds additional colors (red, green), with which the details are contrasted throughout the composition. And the rest – the picture is as perfectly executed as the other works of the master.

Showing interest in various exotic, after returning from North Africa, Delacroix creates a series of paintings on character, morals and life, which he displayed during his trip in many sketches. This work was a kind of landmark in the work of Delacroix and in the history of all art.