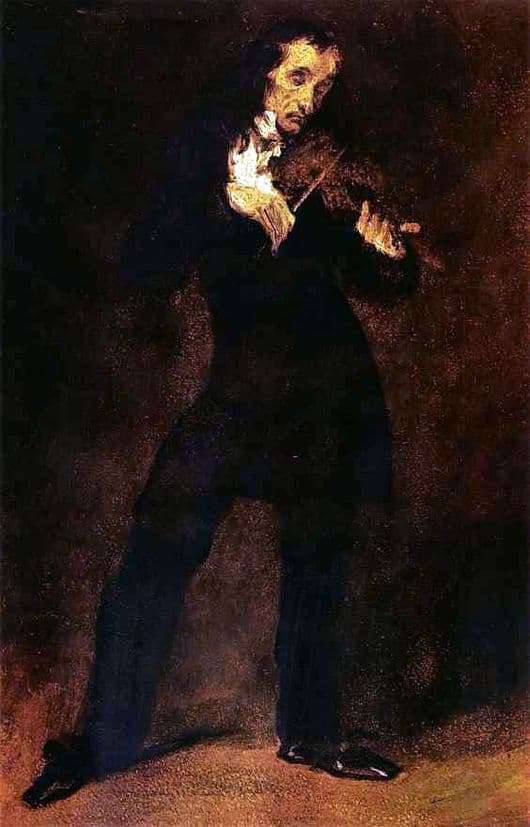 A great musician who knew how to handle his instrument perfectly. They even said that he was associated with the devil, because no one knew how to play the violin, as he did.

Outwardly, Paganini was not cute, even ugly, and many noticed this. And by the way, his appearance also added advantages to the opinion that he is friendly with Satan. But the magic of art attracted many fans to it and its popularity was extremely huge. But when he died, they forgot about him and did not even let him be buried.

For about several years, the coffin with his body traveled around Europe, the priests did not allow the body to be interred just because they considered it a devil’s henchman. Wildness! But it worked, and it was possible to bury him four or five years later after the death of the musician. And this was done with great reservations and not as pompous as it could have been if its reputation was different.

Delacroix, being familiar with the musician, persuaded him to pose once. He agreed, but not for long. So he painted the face from memory. Moreover, he managed to draw his face during the funeral, or rather, to draw. Paganini often played the violin, closing his eyes, as if extracting sounds from the soul. This is what the artist depicted and inadvertently emphasized one flaw – the musician was a little limp. Therefore, Paganini’s posture on the canvas is not even.

The picture itself is dark, almost all black, except for the shirt of the musician. By the way, he went all the time – in black. And it was not from the lack of money for other clothes, but it was a belief that the black color hides all its flaws.

Be that as it may, the artist managed to convey both genius and loneliness to Paganini. It was possible not to hide his flaws and not to overdo it in ugliness. I managed to hear the violin playing with the help of paints.