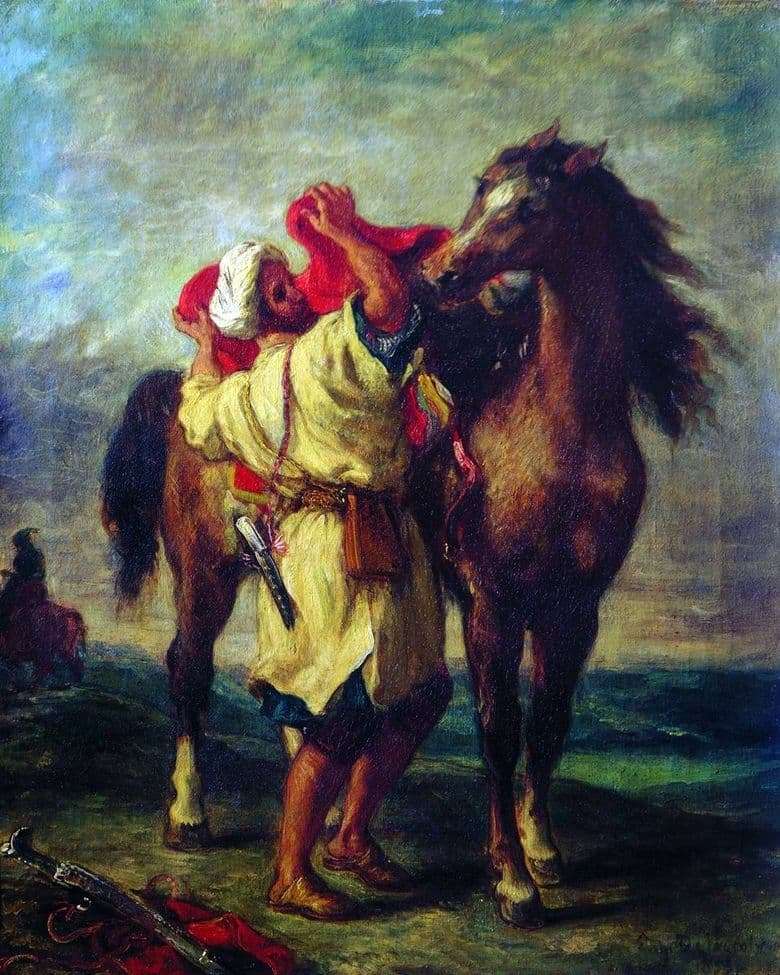 Eugene Delacroix refers to the flow of the French romantics. Adherence to this direction is reflected in the painting “Moroccan, saddling a horse.” The artist conveys the smallest details of the scene with stunning accuracy. We see the folds on the clothes of a Moroccan, every wrinkle on his face.

The plot of the canvas Eugene Delacroix drew from his trip to Morocco. Then he was impressed by the strict beauty of the Moroccan nature and the courage and love of freedom of this Oriental people, which the artist tried to express in his work. But this work has not turned into a dry reproduction of the ethnic characteristics of the visited state.

Eugene Delacroix remains true to himself and portrays a Moroccan through the prism of romanticism. Simple in its essence, the plot has a deep dynamic due to a special writing technique. The bizarre combination of contrasting shades, fluidity and iridescence of colors, the severity of forms and contours gives the work a special romantic pathos and allows the combination to convey the inner anxiety of the main character of the picture behind external ostentation.

The picture is written by a “heavy brush”. Thick strokes increase the oppressive anxiety of the protagonist. Storm clouds, a wave of the sea, the contrast of the background colors and the sad figure of a rider moving away in the background give the picture a mood of anxious anticipation. The dagger on the Moroccan’s belt, the red cloth, as if burning his hands and the disturbed position of the horse, suggest that a certain event awaits the hero on the trip. And there is no certainty that its outcome will be favorable for the hero. But what should happen to a Moroccan on a journey, the artist is silent, allowing the viewer to think out the final story on his own.