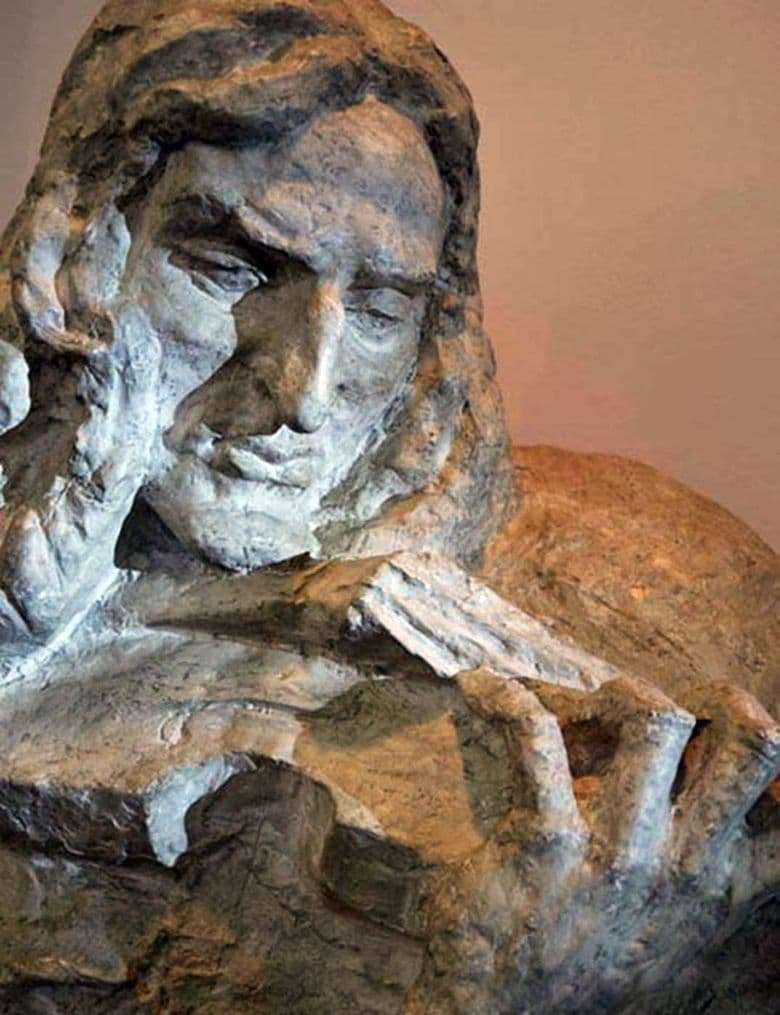 The keynote for Konenkov was the leitmotif of music, he created numerous portraits of famous composers, famous singers, talented performers, he repeatedly turned to the image of the great Italian. Once, at a book fair, he discovered an old lithograph with a stamp of a portrait of Niccolò Paganini, in whose music he felt a flame, burning out anger, helping to overcome the difficulties of life, he experienced a frantic creative rise. The rebellious spirit of the composer reflected the revolutionary time in our country.

An old imprint helped crystallize the image of an Italian from a sculptor. Konenkov imagined Paganini bow, extracting ardent temperamental sounds affecting the heart and soul. The sculptor manages to clothe the impetuosity of bow movements and bursts of enlightenment of the violin genius in a bodily image. He believes that the clay is too heavy for such an image.

The artist portrays the amazing, sad, impulsive and inspired face of a musician with a long crooked nose and piercing eyes under thick hanging eyebrows, framed with long hair. For the first time in his work, the artist pays attention to the hands of the model, out of his tools comes a gusty, slim, thin brush that is of great importance in the composition of the image. Paganini’s motive passed through the thread through the whole Konenkov creative process, which highly appreciated the original plaster casting of the first sculpture and its very shore. 46 years later, a bronze statue was made from it, and then, in 1906, the master dreamed of carving it out of marble.

Konenkov showed the great Italian at the moment when he pressed the violin to his shoulder, a moment ago tearing off the bow from the strings, completing the melody. The violinist’s eyes are directed to the strings of the instrument, and the last echoes of divine sounds continue to sound in the air.

After the exhibition, at which the sculpture was presented, D. N. Ryabushinsky bought it and locked it in his mansion, and hid it before emigration so that no one could find it until now. Konenkov returned to the image of his character more than once, and after half a century he created another version – already from wood.