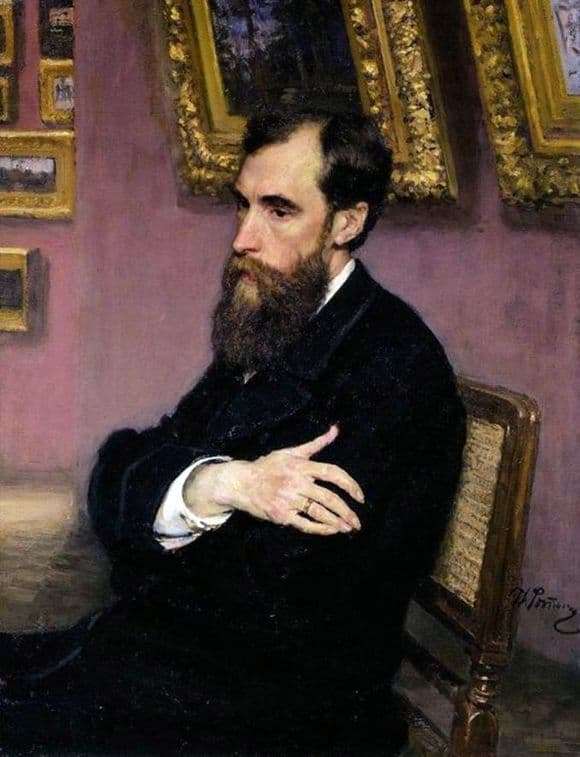 Repin managed to create an incredibly simple and at the same time a deep rub. We see Tretyakov, who founded the famous painting gallery. The artist conveyed the depth and at the same time the complexity of the character of this person. In the dark eyes of Tretyakov, sadness lurks. His beard is well-groomed, his nose is perfectly even. That is what a true philosopher, reflecting on the meaning of life, should be.

Repin chooses an interesting moment as the final detail for his canvas. A wedding ring glitters on the patron’s hand. It can tell a lot about a person. Repin wrote this hand with incredible skill. Thin fingers are impressive.

Tretyakov’s posture is also characteristic. He tries to take up very little space. This indicates his modesty. He can not exist without those pictures that he managed to collect. The cause, which became the meaning of the whole life of this great man, became part of it.

The picture does not impress with a lively color or temperamental brush. The artist understands that the Tretyakov was by nature restrained and modest. That is why his personality would really badly be in harmony with the violent colors and expressive technique. That is why Repin chooses a bit of a dry and very restrained manner. Only in this way could he convey the essence of the character of this great man.

We see Tretyakov, who is sitting on a soft chair. He leaned a little against his back.

Pavel Mikhailovich thought about something. He is completely focused on his thoughts. It seems that he is not aware of what is happening around, so he is immersed in himself. It seems to us that we are a closed person. His face is still young. It is framed with a reddish little beard. Before us is an organized, collected person.

Contemporaries rightly believed that Repin managed to create a truly successful portrait. They saw an external and internal similarity with Tretyakov.