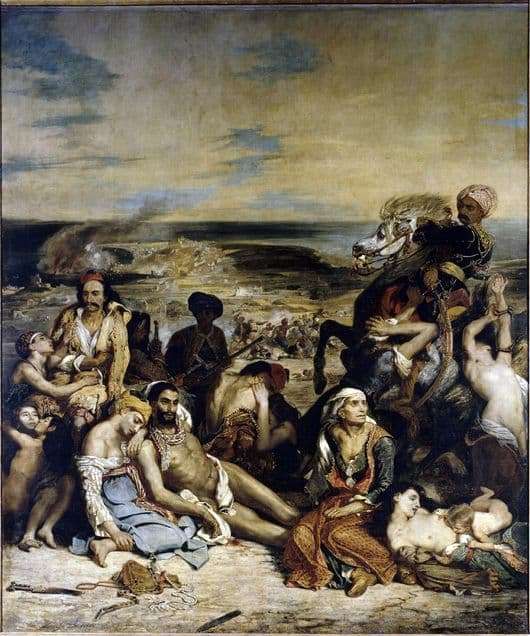 The Delacroix picture reflects one of the tragic episodes in the history of Greece. One day in September 1821, Turkish troops invaded the island of Chios, in the Aegean Sea. In retaliation for the fact that the local population reacted with sympathy to the events of the people’s liberation struggle of the Greek people against the Turkish yoke, the Turks massacred tens of thousands of inhabitants and thousands of them drove them into slavery.

The painting “The Massacre at Chios” was a response to the inhumanity of this action. Against the background of armed horsemen, the inhabitants of the island doomed to death appear before the viewer. They resigned themselves to the impending doom, their views are detached. The Chios realize the inevitability and only hold the weeping children closer to themselves. And in the background – neat buildings located in a valley illuminated by the fertile sun of the Mediterranean. There, too, settled death, Turkish troops kill everyone.

The viewer’s gaze slides on and the valley is replaced by the overcast waters of the Aegean Sea, which have absorbed all the pain and cruelty of the drama that has been played out. The bright strip of the sky above the dark smooth surface of the sea, indifferently looks at all the participants.

Delacroix returns to the figurative language and symbolism of the ancient Greek tragedy. The Turkish cavalryman, who drags the naked Greek woman behind him, remains unshakable and cold to the suffering of the unfortunate. He is a sign of future bondage and shackles. It is symbolic and a small child, in vain trying to cling to the breast of a murdered mother. Blood flows out of the body of a mortally wounded man in a red stream and generously sprinkles dried soil.

A fragment of a dagger beside it shows that the resistance forces are exhausted and broken. The empty bag, not far from the dagger, symbolizes the moral and material emptiness of this scorched and watered earth.